On 18 June 2011, a crowd more than ten thousand-strong turned Hong Lim Park into a giant pink party1: there were pink T-shirts, pink wigs, pink cupcakes on pink picnic mats, dogs in pink leashes and pink bowties, and ten thousand people in pink who stood up in support of the freedom to love, regardless of sexual orientation. 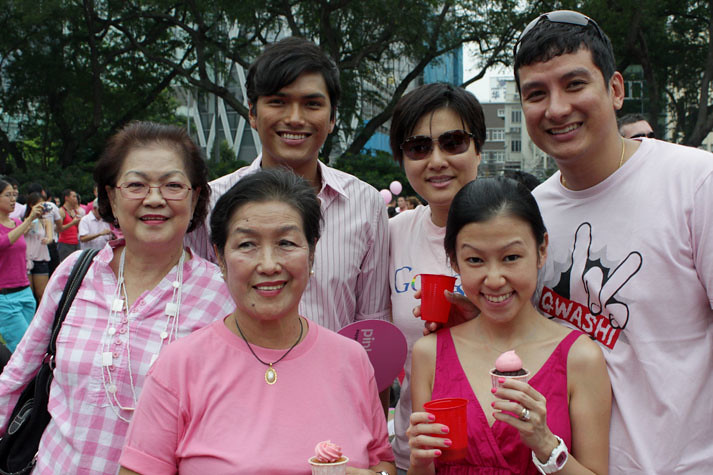 The thing that struck me about this year’s Pink Dot was that almost everyone I approached did not mind being interviewed, named and photographed. I had assumed there would be some degree of fear, or at least hesitation to reveal personal information; instead, I found fearlessness. It was a pleasant surprise that so many people – all except one – were willing to be publicly named for their sexuality or for their support of LGBTQ (Lesbian, Gay, Bisexual, Transgender, Queer) friends and family.

Of course there were the quieter ones, who would have been more guarded about themselves, for fear of being seen as gay or even gay-friendly. To me, they are the courageous ones for making it to Pink Dot to support its cause, in spite of their own discomfort and panic. Some of these brave ones are my friends, who skipped the first Pink Dot out of fear, made it to the second with much anxiety, and are now comfortably attending their third.

This collective bravery and inner journey of so many people is, to me, the wonderful power of the Pink Dot events. This is probably what motivated all the volunteers, organizers and sponsors to put in all that time, effort and money to make it happen. When Pink Dot is over, the concert ended, and the crowd gone home, the idea of Pink Dot remains.

This is an idea that is still controversial, still pushes boundaries in a Singapore that criminalises consensual homosexual sex between (adult) men. Yet, I also wonder if the idea of Pink Dot is a double-edged sword – one that stimulates change and reinforces the status quo at the same time.

During the Parliamentary debate on 377A in 2007, Prime Minister Lee Hsien Loong warned the LGBTQ community that “the more the gay activists push this agenda [to decriminalize consensual homosexual sex between adults], the stronger will be the push back from conservative forces in our society … And the result will be counter productive because it is going to lead to less space for the gay community in Singapore.”2 In other words, he felt it would be better for gay people and Singapore in general, if “gay activists” would just sit down and shut up.

Evidently, it is easier for the Prime Minister to tell LGBTQ Singaporeans to keep quiet and not to push for de-criminalisation of their private consensual behaviour, than to tell the supposed ‘conservative majority’ to accept that the Government does not govern the sexual activities of consenting adults.

It is interesting that PM Lee seems to fear the anger and backlash of the moral conservative and religious communities more than that of the ‘immoral’, ‘depraved’ LGBTQ communities. Perhaps it is merely a numbers game. Yet, if the Government truly regards LGBTQ people as ‘immoral criminals’ under the law, shouldn’t it be more wary of them?

Do they remember America’s Stonewall uprising in 1969? That year, when homosexual acts were still illegal in America, the police raided a gay bar, the Stonewall Inn in Greenwich Village. Suddenly and for the first time, gay men and women in that city were provoked into fighting back with collective, sustained violent protests and demonstrations, starting what became the gay rights movement in America, and finally achieving the basic equality of not being considered criminals under the law.

Perhaps PM Lee is sure that LGBTQ Singaporeans are light-years away from such demonstrations and violence, and therefore are easily cowed into submission and acceptance of their marginalization and technically ‘criminal status’. And that may be true. 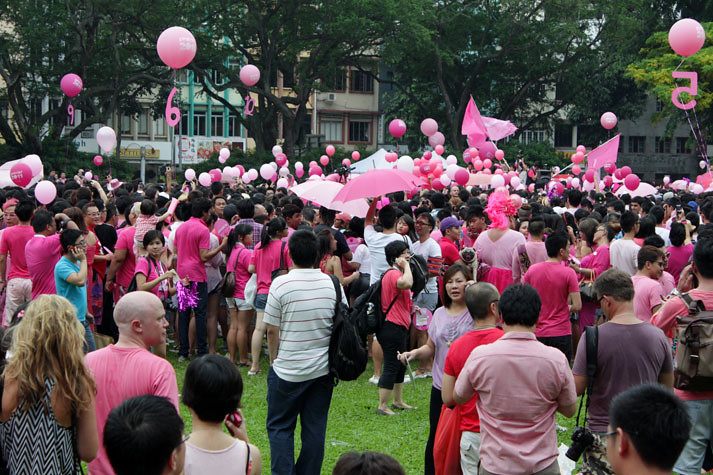 And perhaps this is the irony of Pink Dot. In its own light-hearted, inclusive and family-oriented way, Pink Dot has paved the way for greater societal acceptance and self-acceptance of LGBTQ Singaporeans. It has provoked conversations among family and friends, some of which have resulted in increased understanding and acceptance. And rather than provoking a negative backlash, the number of Pink Dot supporters has doubled each year – from 2,500 people in 2009, to 4,000 in 2010, and well over 10,000 this year.

Yet, such a peaceful demonstration with its few hours of euphoria can just as easily be written off by the Government as a useful safety valve for LGBTQ Singaporeans to vent any brewing discontent and frustration, or a time for them to feel happy and overlook the institutionalised discrimination, imagining that society has progressed. Then, Pink Dot over, it is business as usual. 377A still stands. The perception that LGBTQ people can be told to quietly accept their status, remains.

I am not suggesting that Pink Dot is useless. It is far from useless. The idea of Pink Dot will continue to reverberate in the hearts and minds of everyone who attends it, or watches its videos, or hears about it. Singapore will continue to grow in political maturity, and I believe the two contradictory effects of Pink Dot will not negate each other but merely set the scene for a more robust debate and – I hope – a fairer resolution in the near future.