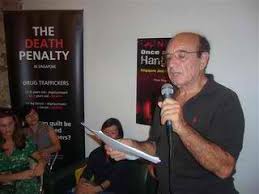 Thirty press freedom groups from five continents, all members of IFEX, have signed a petition to Singapore’s Prime Minister Lee Hsien Loong about the case of Malaysia-based British writer and journalist Alan Shadrake, who could be sent to prison in Singapore for his book, “Once a Jolly Hangman: Singapore Justice in the Dock” about the death penalty in Singapore.

The petition has already been signed online by hundreds of people.

A court is due to announce Shadrake’s sentence tomorrow (8 November). Found guilty of contempt on 3 November, he is facing imprisonment, a fine, or both.

We would like to draw your attention to the case of British writer and journalist Alan Shadrake, who is currently being tried in your country for writing a book about the death penalty. To our knowledge, there are no grounds for the contempt of court charge that the attorney-general’s office has brought against him.

We therefore urge you to intercede with the appropriate authorities to get this charge withdrawn and to allow Mr. Shadrake to leave your country, as his health requires.