This idea, along with a new mentoring programme for kids, were some of the things discussed at a workshop on urban poverty. 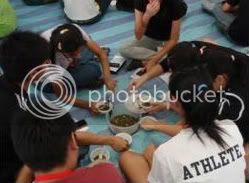 11 JUNE 2009 — A SEARCH engine to plug gaps in the current social assistance schemes was proposed at a forum for social change last week.

“The list of current assistance schemes is too thick and social workers have no time to peruse through the whole list to see which schemes the family qualifies for,” said Mrs Sally Sim, a senior social worker with Care Community Services Centre.

She also reflected during the panel discussion that as social workers, they want to spend more time counseling their clients and help in simplifying the process of finding suitable assistance schemes for their clients would be greatly appreciated.

As part of the forum, the Urban Poverty Special Interest Group (SIG) organized a panel discussion which hosted representatives from the different Voluntary Welfare Organizations and the North East Community Department Council.

The proposed idea of the search engine aims to reduce the amount of paperwork each social worker has to sieve through before finding a scheme that a recipient would qualify. Social workers will enter key qualification criteria’s of the recipient such as HDB flat size, income level, number of children and the search engine will sieve out the aid schemes that they qualify for.

However, Ms Patricia Wee, a senior social worker with the Ang Mo Kio Family Service Centre felt that due to the fluid nature of the schemes, there will be a need for frequent updates and questioned the availability of manpower and financial resources to maintain the database.

“With the database in place, it serves to limit the resources rather than expand the creativity or motivation of social workers to actively source for other resources out there.” added Ms Wee.

Centre manager of New Hope Community Services, Mr Ravi Philemon, also commented that the database would not be feasible as the needs of an individual should not be determined by a computer program. He reiterated that the complexities with the various schemes lay in their overlapping criteria’s and its administration by different parties.

The second idea proposed was the implementation of a mentoring program. Children from urban poverished families often face financial insecurities and a lack of motivation to improve one’s living standards. A lack of suitable figures of guidance further excebates the problem as they will not be able to make informed lifestyle choices.

The target group for this programme is children aged from nine to thirteen as this are the ages where they are most impressionable. The participants hope to implement this progamme over a period of six months to one year depending on the child’s progress and needs. They hope to start the pilot project with New Hope Community Services before evaluating the effectiveness’ of this programme.

When asked, Ms Wee agreed that mentoring program is something that youths today can do and it is realistic to implement.

There is no official poverty line in Singapore, but the national benchmark of ‘poor’ is a monthly gross total household income of $1500 and below. In 2001, the number of people requiring financial assistance was 14 300 and in 2003, the number rose to 31 570.

Many still fall through the cracks

Despite the panelists agreeing that there are many more assistance schemes available now to help the urban poor, many are still left out.

Mr Ravi gave a personal example to the participants of his mother holding down three jobs to keep the family going while their relatives took care of him and his siblings. This scenario which was prevalent thirty to forty years ago is hardly observed in Singapore today as the family unit became more nuclear centered.

Said Ms Wee: “One loophole in the schemes is the unwed mothers. They do not qualify for baby bonus and other assistance schemes.”

Mrs Sim gave a case example of a 72 year old cleaner who did not qualify for any assistance even though he is in arrears with the Housing Development Board. This was because he is employed and has no medical problems. She further mentioned that this example shows that more flexibility and consideration needs to be exercised when implementing the criteria’s for social assistance schemes.