How many has Singapore hung from the gallows?

by The Online Citizen
in Opinion
Reading Time: 7 mins read
4

The death penalty has been a part of crime and punishment in Singapore from day one. Although there is a host of crimes under Singapore law which attracts the death penalty, Singapore has by and large executed persons convicted of murder and, since the enactment of the Misuse of Drug Act in 1975, drug-trafficking.

Back in 2004, Singapore was put in the spotlight by a scathing paper, “Singapore – The death penalty: a hidden toll of executions” published by Amnesty International criticising Singapore’s use of the death penalty. In particular, the paper chastised Singapore for its high rate of execution relative to its population size. The paper said that more than 400 had been executed since 1991 up the date of their paper, 15 January 2004. How true is that? Since Singapore became an independent nation in 1965, how many persons have Singapore executed?

I tried to find official judicial execution statistics, but it turned out to be a cat-and-mouse game.

On 12 October 2011, then newly elected Member of Parliament Pritam Singh from the Workers’ Party filed a written question for the Minister for Home Affairs (MHA), asking from 2004 to 2010, how many criminals had been hanged in Singapore and what was the breakdown in terms of foreigners, permanent residents and Singaporeans for each of those years.1 In reply, Deputy Prime Minister Teo Chee Hean provided statistics indicating that from 2004 to 2010, a total of 38 people were executed, comprising 26 Singaporeans and 12 foreigners.

DPM Teo also stated that the Singapore Prison Service (SPS) publishes the number of judicial executions in its Prisons Annual Report and that those Annual Reports were publicly available on the SPS website. His statement gives the impression that the Singapore Government is transparent about execution statistics. It may seem to the casual observer that Pritam Singh’s question was unnecessary if execution statistics were publicly available by checking the SPS website.

In fact, Pritam Singh’s question was not redundant at all.

Perhaps Pritam Singh was motivated to ask for the execution statistics from 2004 to 2010 because prior to filing his question, which DPM Teo Chee Hean answered on 12 October 2011, Pritam Singh could not find those figures anywhere.

How about executions statistics prior to 2004?

Amnesty International’s paper published on 15 January 2004 prompted the Singapore Government to issue a rebuttal on 30 January 2004. Residing as footnote no. 4 at the end of the rebuttal were a set of statistics indicating that a total of 138 persons were executed “in the last 5 years”. Given the date of that rebuttal, “the last 5 years” would mean 1999 to 2003. Thanks to Amnesty International’s paper, another piece of official information was coughed up.

Fortuitously, a set of official execution statistics that fell into the public domain inadvertently answered this question. On 24 September 2003, then Prime Minister Goh Chok Tong gave the BBC in an interview in which he glibly said that up to 80 people had been executed in the first nine months of 2003. To correct the erroneous figure, the Singapore Government attached a note to the transcript of the BBC interview stating that 21 persons were executed in 2000, 27 in 2001 and 28 in 2002. 4 Thus, another set of official statistics fell out into the open. The number of persons executed in 2003 can be worked out by arithmetic. Thus, the gap in the execution statistics was filled.

How about executions statistics prior to 1999?

Rolling up my sleeves, I went on my hands and knees to claw and trawl the graveyard of old Parliamentary reports. My efforts were rewarded. I found that on 12 January 2001, in reply to a question filed by then non-constituency member of parliament JB Jeyaretnam from the Workers’ Party, Wong Kan Seng provided the number of persons who have been hanged in Singapore for the years 1991-2000, giving the numbers year by year and splitting the number for each year into the various crimes for which they were hanged.5 Thanks to JBJ’s guts, another trove of official execution statistics was given out.

As for the number of persons hanged prior to 1991, my efforts to find those numbers have drawn a blank. Hopefully, someone has or has found those numbers and if so, I would be keen to learn.

In summary, the official sources which I managed to find are as follows:

Piecing them together, the total number of persons hanged in each year from 1991 to 2019 can be calculated. Below is a tabulation of the information provided by the official sources. 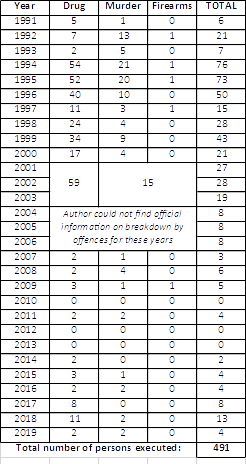 From the tabulation, the following conclusions can be quickly be drawn:

No doubt more observations or inferences will come to mind on further consideration of the statistics.

A set of information with gaps is incoherent. A complete set of figures is always useful. Which is why coherent factual information, especially information relating to state action carried out on behalf of the citizenry, should be made available for one to consider and ponder.

Who knew that one has to be quite a sleuth to track down the number of persons hanged by the state.

I do feel I am like Sherlock Holmes solving a murder mystery, pardon the pun.

Jeannette Chong-Aruldoss is a practising lawyer of more than 30 years’ standing who is interested in but does not specialise in the practice of Criminal Law. In uncovering the facts discussed in this article, her research tool was a good wi-fi connection to the internet and a bee in her bonnet. Putting herself in the shoes of a layman, she did not avail of materials which are only accessible by subscription or otherwise unavailable to the general public.

3 execution statistics from 2007 to 2019 are also available at https://data.gov.sg/dataset/judicial-executions