Speaker of Parliament Tan Chuan-Jin took to his Facebook on Wednesday (25 March), calling Singaporeans who put aside the government’s advisories and travel abroad deliberately or go out by flouting the stay-home notice (SHN) “guilty of endangering lives” during the COVID-19 pandemic.

Despite advises on not to travel, Mr Tan wrote that Singaporeans who “wantonly leave” and travel abroad for non-essential trips are “guilty of endangering lives on their return”.

He added, “What makes it worse is that they are doing all this in the full glare of awareness of what the consequences may be.”

Noting that the current spike in COVID-19 cases in Singapore was due to those who return from abroad, Mr Tan said that it is necessary to accept and look after them even if they sick as they are part of Singapore, though he warned that the number of imported cases and local unlinked cases might increase in the coming days.

Mr Tan, therefore, said, “We needed to step up measures because of the surge in numbers involved and to quickly minimise the rapid spread into the community.”

Mr Tan also noted that government has put in place a number of measures for tracking, isolating and quarantine since “day one” as part of efforts to maintain the low rates of infection and implement the effective treatment for COVID-19 cases.

“We said that these measures will evolve with time as the situation develops. It has. We have been able to keep numbers of infection manageable so that our healthcare system is not overwhelmed. Because we have been able to do that, our doctors and nurses are able to help those who are seriously ill recover,” he said.

“We didn’t use a blunt tool because it wasn’t necessary,” Mr Tan added, while explaining how the government’s “restrictive steps” make an impact on the daily lives, economy and livelihoods of citizens.

He said, “So it’s about managing risks and probabilities so that we can minimise infection, help heal the sick, and maintain what normalcy we can. We ratchet up our restrictions as and when needed.”

Speaking on the lockdown policies in other countries, Mr Tan commented that those countries have “lost control” and “failed to manage the initial spread”, leading to a surge in number of infections in these countries. This then overwhelmed their healthcare systems and consequently increased fatality.

Mr Tan went on and said, “We are still managing and are ‘not there’, like them…yet. We are not where they are because from day one, we have been doing what has been described above.”

In response to Mr Tan’s Facebook post, the majority of netizens asked for government to impose a stricter law and measure in order to deter those to continue neglecting the SNH and travel advisories. Noting the importance of education, some suggested to make the law mandatory, or engaged the people in social service such as helping temperature checking, cleaning and contact tracing, so that they will “be a considerate human being”. 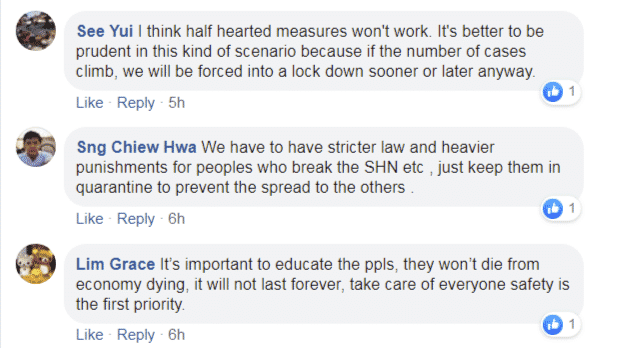 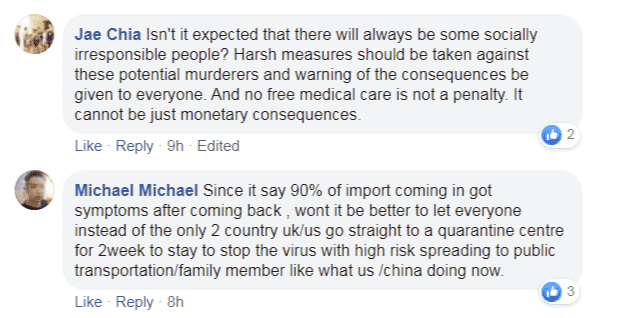 On the other hand, a few netizens doubted the government’s clarity on delivering the message, which caused confusion among the public. They hoped that the government will be more consistent and clear when it deliver the order and advice to the public.

As for the economic implication of the global pandemic, some netizens also raised their financial concerns and called out the government to roll out support measures to alleviate the burden of citizens.

While applauding the government’s efforts in fighting against the disease, some netizens also opined that the similar measures for social distancing in public areas should be subjected to all public transport. This is because they deem this important to contain the transmission of the disease.

However, a netizen opined that government decision sometimes could not accommodate each and everyone in the country as “there is a limitation on how the money can help everyone that is affected”, especially in this unprecedented times. “No decision is a good decision at this moment as no one know the result at the end. We can just weight the odd and place our bets on the highest possible winning chance,” he wrote.