On Friday (20 March), in a thread on a Reddit platform titled, “To the unsung hero who found my wallet, THANK YOU!”  by redditor IamPsauL thanked an anonymous Singaporean Samaritan who found his lost wallet and surrendered it to the police.

The Singapore redditor shared an image in the thread of a police report that enlisted all the lost items. Contents of the wallet include his Pink IC, a driving license, a Nets Cash card, a SAF 11B card, a silver Passion card along with S$465 in cash.

The redditor added the money was meant for the entire budget for the month. The redditor wrote, “Perhaps no one may know I’m having one of the lowest point of time in my life, only to have my wallet dropped out of my old waist pouch along with all my identifications.”

Upon receiving the returned wallet, the redditor expressed his gratitude as he wrote, “Your actions have not only spark a light during my dark times but (dramatic but true) brought back my faith in humanity”.

Redditor IamPsaul lamented that he was unable to trace the identity of the anonymous Samaritan who had returned his wallet. Therefore, the redditor, expressed hopes that he can extend a small token of appreciation to the samaritan in the event that he gets to know who the person is.

In the same thread, other redditors too stepped in to recount their own experiences in recovering lost items.

A redditor, babyyodaismyguide, explained that her husband had lost his phone when it fell out of a hole in his pocket while travelling on a bus. The person who found the phone had taken another bus back to the original bus stop just to return it to the husband. The good samaritan had refused to accept a reward.

Similarly, redditor babyyodaismyguide shared that she too had once lost her wallet and had to file a police report.

Upon returning home, the redditor was informed that a kind lady had visited her home to return the wallet with a sweet note that conveyed well wishes. 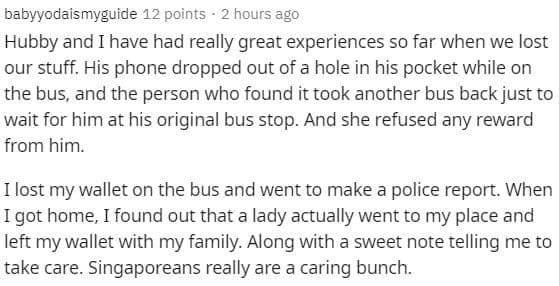 Redditor ForgottenCapellini writes, “I had my wallet with S$700 in it fall out at the MRT station, and it was returned to me with all the cash in it. Had just gotten paid at work. I understand the despair, and also the relief.” 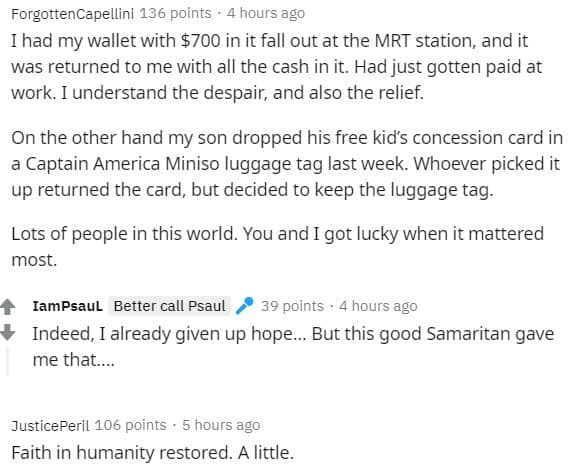 Meanwhile , reddit user Rinkouri told of his experiences. He had lost several possessions such as a phone,  a debit card and  his wallet  with cash. But, they were all returned to him subsequently.

Another redditor with the username UnpredictableApple disclosed that it was perhaps a special trait of Singaporeans who are honest enough to return lost possessions.

The redditor adds, “I’ve also lost many things and left behind many things, went back and it was still there! Our school even has a dedicated online lost and found made by our own students.”

Redditors in the thread found IamPsaul story to be heart-warming and thanked him for brightening their days during difficult times.