As online shopping starts to become a norm and part of the daily lives of the people, iPrice releases the results of Q3 for Map of E-commerce(MoE). The study tracks the most visited e-commerce website in Singapore based on SimilarWeb, a digital market intelligence platform. 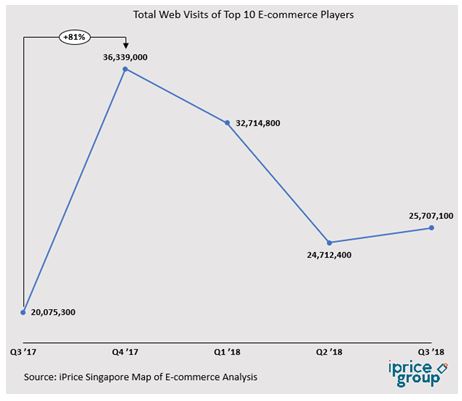 Singaporeans are expected to do more online shopping as the year end sale comes, even higher than 2017, according to our research.

During Q3 last year, the top 10 e-commerce players as ranked by MoE, accumulate a total of almost 20.1 million web visits. The numbers rose 81 per cent, reaching 36.4 million in Q4. A similar trend is expected for this year, as study finds the online shopping scene in Singapore will grow continuously.

The e-commerce user penetration is expected to increase to 68.3 per cent compared to 64.7 per cent last year, as found by Go-globe. This is due to the high internet connectivity rate and willingness of the population to shop online. According to a consumer payment attitudes study by Visa, 50 per cent of Singaporeans would do all their shopping online if possible, ranking highest in the region.

Although it’s the smallest country in the region, Singapore also has the highest online spending per capita. State of E-commerce 2017 found Singapore’s merchants score highest with a basket size of US$91, 63 per cent more than the second country, Philippines. 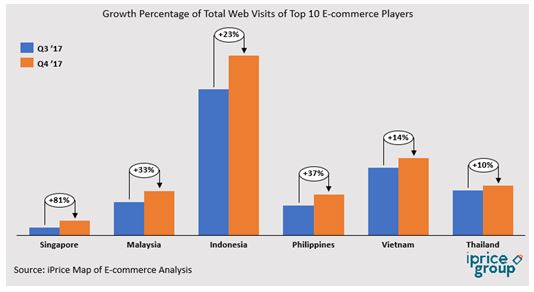 Adding on to that, Singapore shows the highest growth in web visits between Q3 and Q4 last year, compared to other Southeast Asia countries. The lion city recorded a very big difference of 81 per cent more visits to the top 10 e-commerce players, the Philippines placed second at 37 per cent more whereas Malaysia third at 33 per cent. 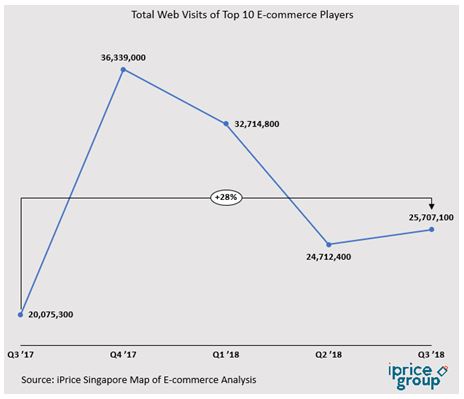 These observations show highly positive growth in the online shopping scene. According to MoE as well, the average total web visits for top 10 e-commerce players in Singapore has increased 28 per cent compared to the same period as last year, an additional 5.6 million web visits.

iPrice is expecting the growth from Q3 to Q4 this year will exceed 81 per cent, bringing in at least 46.6 million traffics with the top 10 e-commerce merchants alone. Adding on to the traffic from other merchants which fall below top 10, web visits to e-commerce sites are expected to reach 50 million for Q4.

The Sea-backed company, Shopee shows high growth in web visits for Q3. The web visits increase 41 per cent, from 1.81 million in Q2 to 2.55 million in Q3, as obtained from SimilarWeb. It places 3rd in MoE, after growing from 6th place to the 3rd  last Q2 based on web visits. It is the highest growth in ranking showed by a merchant ever since the MoE is released in Q3 2017.

During September, Shopee celebrated their birthday with the annual 9.9 Super Shopping Sale Day. The web visits during this month are the highest in Q3 at 2.8 million, compare to 2.3 million and 2.5 million respectively in August and July.

On the other hand, Qoo10 and Lazada remained consistent at 1st and 2nd place respectively. Amazon, which entered Singapore last July, placed 12th  based on web visit, bringing in 278,000 traffic.