by The Online Citizen
in Housing
Reading Time: 4 mins read
0

The Housing and Development Board (HDB) is currently looking into the case of an HDB flat unit of which the side walls of its balcony had been partially stuffed with newspapers.

HDB noted that it was “alerted to a video showing old newspapers within the side walls of a balcony which was completed in 1984”.

The Board clarified that it has identified the unit in the Facebook video that has been widely circulated recently, and has since contacted the flat owner.

HDB elaborated in its Facebook post that the work was done “by a renovation contractor engaged by the flat owner” during the installation of windows at the balcony in 1999.

The Board highlighted that “the stuffing was discovered when the flat owner decided to replace the windows recently”.

According to HDB, “no structural safety concerns” were found in its inspection, and that the wall “has since been rectified”.

HDB concluded with a warning, stating that “necessary action” will be carried out should the renovation contractor be found guilty of carrying out the work.

A number of netizens have expressed shock over what they have deemed to be a severe lack of quality control and regulation on the part of the HDB in allowing such shoddy work to be passed, while other netizens have pointed out that the fault does not lie with the HDB, as the work was done by a contractor whom the owner had privately engaged: 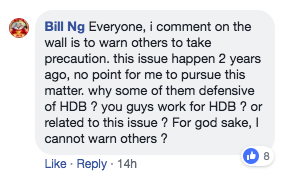 A similar case was reported in 2015, in which a netizen named Josephine discovered that newspapers dated “as far back as 1998” were “mixed with cement that was supposed to be underneath the plastic door frames”.

It was reported that the contractor was tasked to change a door frame in her HDB flat at Ang Mo Kio Avenue 4.

When Josephine queried the contractor regarding the issue, he remarked that her case was not the first one he had come across.

This brings into question the quality control and standards by HDB regarding construction and renovation work done at its flats, and raises the issue as to how frequent the practice of stuffing newspapers in HDB flat walls is carried out.