By Margaret Yang, CMC Markets
The US dollar index climbed against the currencies of most of the US’ G10 counterparts, after the G7 meeting in Brussels.
President Trump and other G7 leaders found common ground regarding increased co-operation in the fight against Islamist terrorism, but failed to resolve disagreements on climate deals. President Trump also accused other NATO members of not spending enough on defence, which raised doubts on the trust between America and its western allies.
The market anticipates a quiet Monday opening, with major markets – including Hong Kong, China, the UK and the US – closed for holiday today.
US equity markets closed at new, record highs after releasing better-than-expected Q1 preliminary GDP readings. Data shows that the US economy grew at a pace of 1.2% in the first quarter, higher than the consensus of 0.9%, but still below the previous quarter’s reading of 1.9%. Durable goods orders, however, slid by 0.4%.
First-quarter economic activities were seasonally weak, but there are signs GDP will regain speed early in the second quarter, with industrial production accelerating in April. That is in line with the Federal Reserve’s view that the slow-down in growth was transitory.
Crude oil prices rebounded over 2% last Friday, erasing some of the losses formed in a sharp decline on Thursday. Technically, $48.7 and $51.7 are WTI’s immediate support and resistance levels, respectively. The supertrend (10,2) has flipped from green to red, indicating that the trend has turned bearish.
US Dollar Index June 2017 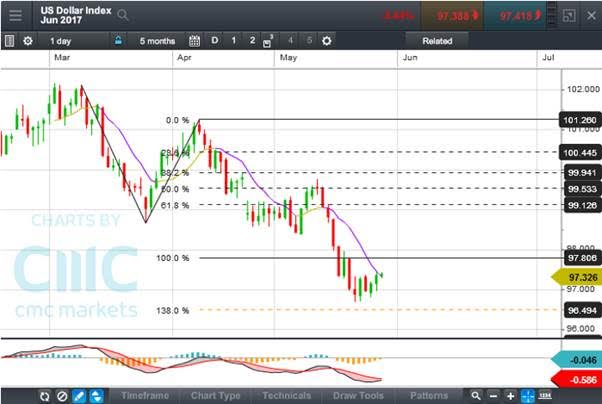