By Margaret Yang, CMC Markets
Two key messages were revealed in the Fed’s meeting minutes last night, which might set a hawkish tone for central banks’ monetary policy in the months to come.
First off, the Fed is close to pulling the trigger on a June rate hike, which is widely expected by market participants. The implied likelihood of rate hike in June, according to the CME Group, now stands at 83.1%.
Secondly, the minutes show that nearly all Fed officers agree with the plan to shrink the central bank’s massive US$4.5tn balance sheet by allowing some securities to roll off in slow, ever-increasing stages. This is to avoid any drastic impact to the liquidity and interest rate curve. It is now widely believed that the Fed will start with this approach as early as December this year.
The US dollar index slipped slightly after the release of the minutes, while the three major equity indices each climbed higher. The discrepancy arising from the dollar’s sluggish performance and a tightening monetary environment, however, couldn’t be easily justified.
Technically, the Dollar Index has been in a downtrend since the March rate hike. According to the Fibonacci extension lines, its immediate support and resistance levels could be found at 96.5 and 97.8 respectively.
US Dollar Index June 2017 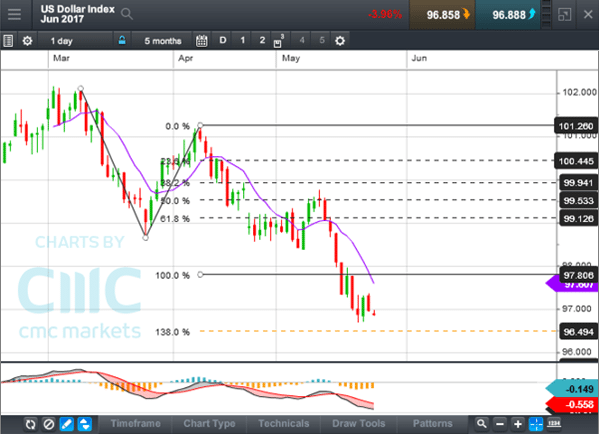