By Margaret Yang, CMC Markets
US equity markets closed 0.6% lower last Thursday as the CPI and retail sales data both missed market expectations. This was in spite of positive earnings surprises from several large banks, namely Wells Fargo, Citigroup and JP Morgan. Rising geopolitical tensions in North Korea and Syria continued to weigh on risk sentiment while capital tended to flee into safe havens, including gold and the Japanese yen.
Gold is trading at a five-month high of $1,293, extending the rally it has enjoyed since the failure of “Trumpcare” in mid-March. The strong yen will likely suppress the Asian markets’ performance today. Several major markets – including Hong Kong, Australia and the UK – are closed for Easter Monday.
Today’s major macro-economic events are all about China; its Q1 GDP, industrial production and retail sales numbers are due at 10am Singapore time. The market sees 6.8% growth in the world’s second largest economy, as the country has pulled itself out of a potential ‘hard-landing’ scenario, with recent PMI and PPI data showing more stablisation.  Earlier this year, China cut its economic growth target to a more modest 6.5% for 2017 to give policymakers more room to push through reforms and cut overcapacity.
As was widely expected, the Monetary Authority of Singapore (MAS) maintained its neutral monetary policy stance by keeping the Singapore dollar nominal effective exchange rate (S$NEER) band flat, in its semi-annual announcement last Thursday. A neutral policy stance is deemed ‘appropriate’ for an extended period and will ensure medium-term price stability, said the regulator.
USD/SGD fluctuated within a moderate range between 1.393-1.399 after this announcement.
Technically, USD/SGD has been on a downward trend since the beginning of this year, with SuperTrend (10, 2.5) flipped into a bearish red colour and continuing to trend downwards. The Fibonacci retracement suggests that the pair is testing a key support level at around the 1.3952 area (50% Fibonacci level) with the next support level to be found at the 1.3811 area.
Singtel, the telecom service provider that operates in both Singapore and Australia, slumped over 3% over the last two trading sessions on news that its rival – broadband provider TPG – will build Australia’s fourth mobile network. Investors worried that the arrival of a fourth competitor will trigger a price war that will potentially hurt returns. Technically, Singtel has formed a ‘double-top’ pattern in its daily charts.
USD/SGD 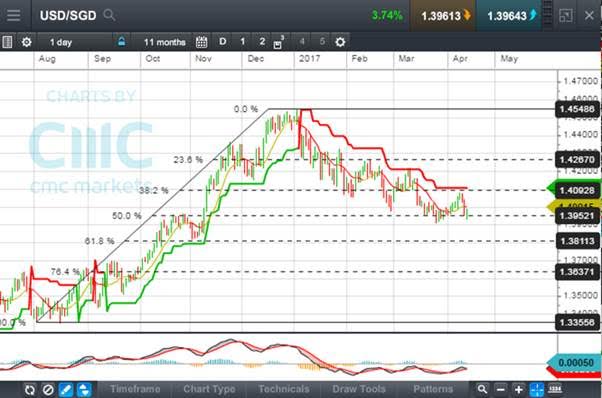