The ‘Trump hurricane’ is back, and the dollar slumps

By Margaret Yang, CMC Markets
After a few weeks of relative calm, the ‘Trump hurricane’ is back to disrupt the tranquillity in the currency markets. The US dollar weakened against most of its G10 peers last night after President Trump complained that the currency is too strong. “I think our dollar is getting too strong, and partially that’s my fault because people have confidence in me. But that’s hurting…”
I describe Trump’s influence on currencies as a hurricane as it’s both harmful and unpredictable. It is debatable whether Trump can have both a weak currency and massive fiscal stimulus at the same time. The latter will provide confidence in the country’s currency, and push the Fed to tighten up monetary policy at a faster pace, which will further strengthen the US dollar. Therefore, in theory, the president ought to have to choose one, rather than both.
For now it only takes a few words- “the dollar is too strong” from wizard Trump to act as a magic wand in sending the US dollar down immediately. This phenomenon begs the question, who is really the biggest ‘currency manipulator’ in the world?
The US dollar index slumped over 0.5% to the 100.02 area this morning, marking a three-day loss since the non-farm payroll figures were announced. USD/JPY fell to a near-five-month low in the 108.85 area this morning, sending the Nikkei 225 index down for a fourth consecutive day. This will weigh on Asian equity market’s sentiment.
The immediate support level for USD/JPY can be found around the 108.8 area which is the 50% Fibonacci retracement level. Breaking below this level will show further weakness, with the next major support level in the 106.5 area (61.8% Fibonacci level). The SuperTrend (10, 3) moving decisively downwards suggests the mid-term downtrend which started at the beginning of the year has yet to come to an end.
Trump also said he wouldn’t label China a currency manipulator, a few days after meeting Chinese leader Xi in Florida, but he argued that a strong dollar is hampering the ability of American firms to compete. USD/CNH opened 150 pips lower, gapping down in response to President Trump’s comments.
USD/JPY 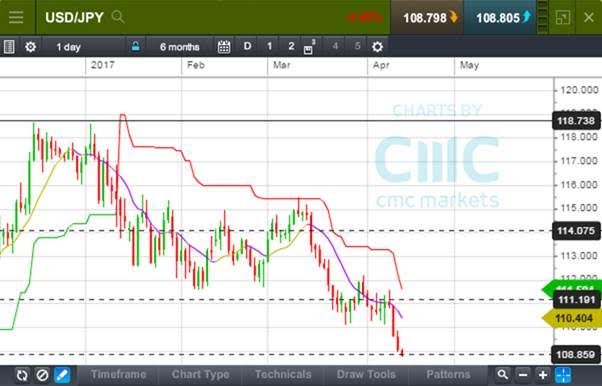