Hard Talk with the Prime Minister: Singapore loses the plot

By Vernon Chan
Did Prime Minister Lee Hsien Loong “did us proud” on Wednesday, or did he stutter, freeze, and turn all defensive? It is unlikely that PM Lee thought his BBC HARDTalk interview with Stephen Sackur would be a walk in the park, much less a fireside chat. His father had appeared on the same show several years ago and turned in a feisty performance.
It is far likely that Lee’s media team is aware of the performative aspects of an international interview, given the pre-approved trailer showing Lee throw out a combative line: “I would not presume to tell you how your press council should operate, why would you presume to tell me my country should run?”
But if we are to judge if that’s a winning line or a defensive cover, we cannot take that line out of context.
And to have the context, we must read the content, at least up to when Lee makes his combative riposte or overly defensive cover.

We begin from the start of the interview. It appears that Lee has come prepared for the interview: he has memorised several short talking points, in response to a list of questions sent in advance to his media team.
Stephen Sackur begins with the Trump issue. He wants Lee to take a firm stand, such as denouncing US president Trump’s project of American protectionism. Lee declines to denounce. Sackur reminds Lee that the Singapore government has issued several strong statements on free trade during the US election campaign anyway. Lee again declines to denounce.
Sackur moves on to the Terrex episode with China. He takes the “pro-Chinese” argument that this was in retaliation to Singapore going back on its word on One China, and is “no longer a good friend” by insisting on training its armed forces in Taiwan. Lee declines to frame the issue as a political event, but as a legal issue. Singapore is a friend of both the US and China.
What about Singapore harping on the Law of the Sea? What about its vocal support of the ICC ruling on the South China Sea? Is that not outright hostility to China? Lee declines to state whether Singapore in fact supports the ICC decision. Singapore respects international law and peaceful arbitration.
And what if the US and China come to blows? Lee again declines to state Singapore’s position; Singapore does not want to be put in a position to choose between US and China. And then follows that up with a list of mutual benefits the US and Singapore have in trade, finance, investment, weapons buying, training. It’s more than enough to hint at where we stand: i.e. where our bread is buttered.
By this point, we note the theatricality of the interview. Sackur throws predictable hard balls at Lee, and allows Lee to respond masterfully as an international diplomat even if his answers do not serve Sackur’s narrative (denounce Trump, denounce either the US or China, etc.).
Mic drop or misfire?
Sackur, moving on Brexit and the UK’s rush to bilateral trade deals, reports that the Liberal Democrat leader made the suggestion that the UK should impose some conditions on future deals with Singapore, in consideration of Singapore’s human rights record. Lee’s immortalised response: “I would not presume to tell you how your press council should operate, why would you presume to tell me my country should run?”
This is a rare case of Lee misfiring in the interview. It is the wrong answer to the wrong question. Sackur didn’t ask Lee to respond to accusations of its poor human rights record. Sackur didn’t ask a question about Singapore’s human rights; he asked about bilateral trade deals.
This is how Lee should have answered, in a joking tone:

But that’s the Lib Dem leader! What has Tim Farron in your House of Commons? Nine MPs? Marginal player. Sad! For marginal parties who can’t evolve into opposition parties but need to keep their handful of seats, it makes political sense to play to whatever fringe voters it has that is sufficient to return the party to the House next election, by saying whatever it is, whether it’s workable or practical or not, and especially when it’s impractical and extremely ideological – because Tim’s not in government, will never be in government. I mean, just look at the things our CSJ says! Look at history, at how Tony Blair started off threatening to incorporate human rights into UK trade deals during his campaign, and ended up doing purely business deals with us as PM, because that’s how mature leaders behave!

Now that would be one hell of a mic drop. and one that would burnish Lee’s reputation as an international diplomat and political sage.
Simple defensiveness, or a retreat of Singapore? 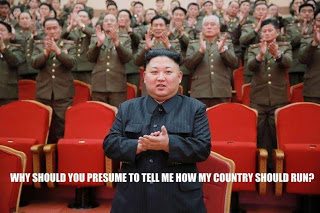 When faced with tough questions from foreign journalists, Lee Hsien Loong’s answer is a far cry from his predecessors’. Lee Kuan Yew, when faced with tough questions, fought back by presuming to teach crusading western journalists how their own countries should be run. Goh Chok Tong, when faced with tough questions, played a conciliatory role by presenting Singapore as a liberalising country, liberalising at its own pace.
At the very least, Lee’s answer bears unfortunate similarities the standard issue defence of every authoritarian leader coming up short of a good reply to international criticism.
The late Lee Kuan Yew would’ve relished the chance to lecture Sackur on what the UK is doing wrong. He would not have relied on an intellectual crutch like “I would not presume to tell you…”
In its Asian Values phase, Singapore even relied on explaining its success via Confucianism. You know, that political philosophy founded by Confucius and his school of minor aristocrat-advisers, roving around feudal China telling everyone how they should ideally run their countries.
And more than anything, Singapore, as a nation relying on international norms and rule of law, survives by reminding everyone else how they should run their countries. It has made a career out of telling China how to modernise, run its cities, and even build its cities…
Is Lee’s uncharacteristic riposte to Sackur indicative of how under international scrutiny, Singapore’s leadership is contemplating a closing off of the Singapore mind, a retreat from the world, a rejection of international discourse?
One cannot accept international trade, finances, and law while rejecting scrutiny and the exchange of ideas and discourse!
This article was first published at http://akikonomu.blogspot.sg/