By Margaret Yang, CMC Markets
This Sunday, the US based food producer Kraft Heinz surprisingly dropped its plan to takeover Unilever two days after the proposal was announced. The reason was that Unilever did not wish to pursue a transaction and thus it would cause more damage than good for Kraft to conduct a public battle in this acquisition.
Last Friday Unilever’s share price soared 14% on the NYSE on hope of this deal. However, the opposite may happen to its share price as the deal been scrapped in early stage.
On Sunday, China suddenly announced that it is suspending all coal imports from North Korea for the rest of the year, a move that signals deterioration in the Beijing- Pyongyang relationship after a few nuclear tests last year. China has been increasingly frustrated by North Korea’s ballistic missile tests and the assassination of Kim Jong Un’s brother could be the catalyst for the import ban.
According to OEC data, North Korea’s coal exports amounted to S$1.03 bn, which accounts for around one third of the country’s total exports in 2014. Its top export destination was China, which consumes over 80% of its total exports.  Therefore, the import ban will exert significant pressure to Pyongyang but is likely to have little impact on world coal prices.
The US market will be closed for trading this evening for Presidents’ Day.
Unilever (US) 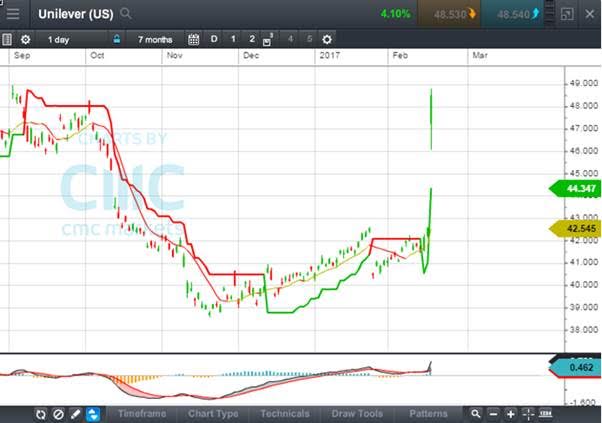