An “unstoppable” rally for US equities

By Margaret Yang, CMC Markets
The US equities rally fuelled by “Trump optimism”, is “totally unstoppable”, to borrow Trump’s own phrase about a united America. Dow Jones soared to a record new high of 20,412 and S&P 500 climbed to 2,328 points last night. Technical indicators including SuperTrend, MACD and moving averages continue to suggest a robust bull trend. Momentum indicator RSI is now close to 76% – a range that suggests a temporary overbought.
The Hang Seng China Enterprise Index (HSCEI) soared over 5% this month to a fifteen-month high of 10,240 points. The rally was boosted by favourable US sentiment as well as signs of stablisation in China’s economy. The January trade balance showed sharp rebounds for imports and exports, suggesting that external and internal demand is improving.
Technically, HSCEI has broken above key resistance level of 10,070 (100% Fibonacci extension level) and its next major resistance level can be found at around 10,814 area (138% Fibonacci extension level).
The mounting concerns of rising populism in the upcoming European elections sent EUR/USD to a three-week low of 1.065. French far-right National Front party candidate Marine Le Pen attracted attention from investors around the world after her main rival, François Fillon was embroiled in a scandal.
If Le Pen is elected, she will not only start a vote to leave the EU, but also adopt unconventional approaches – including trade protectionism and currency depreciation – to reinvigorate the French economy.
What deepened investors’ concern is that the National Front party plans to renominate its 1.7 trillion euro debt into francs after detaching from the euro, which will likely result in the world’s largest ever sovereign default.
Investors have been pricing-in increased risk of Le Pen victory, which could be another big “black swan” event following the EU referendum and the US election last year. The spread between French and German 10 year sovereign bond has widened to its highest level in four years – revealing the ever increasing uncertainties with the country’s political outlook.
US NDAQ 100 – Cash 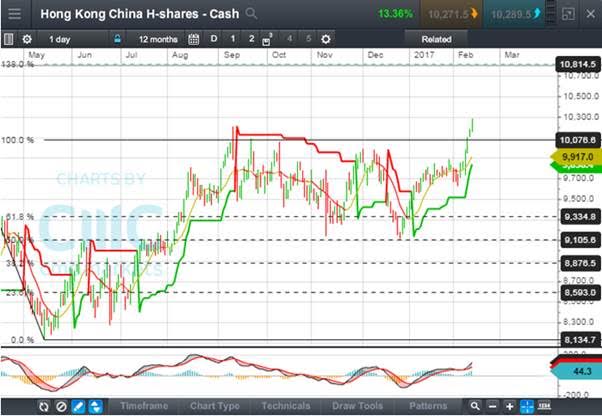