By Margaret Yang, CMC Markets
China’s foreign reserves fell more than expected to US$ 2.998 trillion – a lowest level in six years. The drop is even larger if we take into consideration the drop in the US dollar in the month of Jan, which lifted the foreign reserve by approximately US $22 billion. This added to concerns over China’s capital outflow and sent its currency down. The offshore renminbi dropped around 300 bps to 6.830 area after the release of data.
The euro dropped against US dollar for a third consecutive session to 1.067 area this morning, due to rising uncertainties with the upcoming elections in France and Germany.
French presidential candidate Marine Le Pen mirrored Donald’ Trump’s approach in launching her election campaigning, railing against globalization, Islamic influence and the European Union. If she is elected, it could tear the European Union further into pieces following Brexit. This scenario adds a huge downside tail risk to the euro in the coming months.
The US dollar index rebounded nearly 0.7% last night to 100.4 this morning. Technically, the 10-Day Simple Moving Average line is turning upward and momentum indicator MACD has formed a golden cross. That suggests the bearish sentiment may have come to an end and there could be more upside in the near future.
Crude oil prices slumped nearly 3% last night as the US dollar rebounded.  Tonight investors will watch the DoE crude oil inventory data to assess the supply-demand balance.
EUR/USD 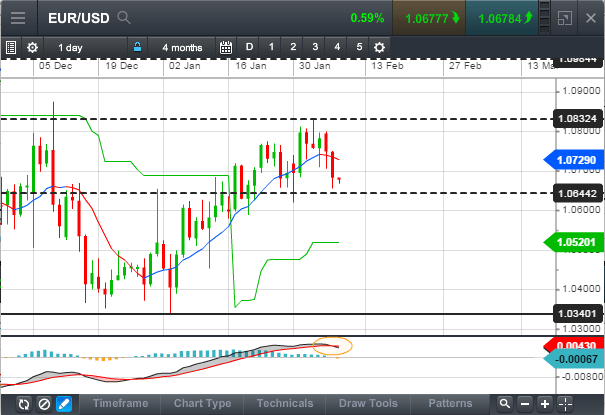