By Margaret Yang, CMC Markets
Singapore’s economy grew faster than what the government and most economists had expected. The fourth quarter GDP grew at an annualized pace of 1.8% yoy, and 9.1% qoq. Those results are much higher than consensus forecast of 0.6% and 3.7% respectively.
The growth was mainly driven by strong performance in the manufacturing sector, which expanded 6.5% on a yearly basis. This growth was largely due to the electronics and biomedical cluster, while transport engineering and general manufacturing clusters still remain soft.  Service production industries grew at a slower pace of 0.6%. Construction slid by 2.8% as the government’s cooling measures on the property market continues to suppress the private sector construction activities.
The Straits Times Index ended 8.4 points or 0.3% lower to 2880.76 points on the last trading day in 2016, taking the full year performance to -0.07%. I hope to see that this GDP report will kick off to a good start for Singapore equity on the first trading day in 2017. The downsides are cushioned by low valuation and signs of improved fundamental outlook.
China PMI stabilizes
China’s manufacturing activities expanded for a fifth consecutive month in December, although the pace of growth slowed somewhat. The official Manufacturing PMI stood at 51.4 in December as compared to 51.7 in the previous month. The reading was also slightly below market consensus of 51.5.
This morning’s Caixin Manufacturing PMI stands at 51.9, higher than forecast of 50.7 and also an advance from previous month’s reading of 50.9.
This showed that government’s measures to curb the property bubble in early October 2016 have started to have a knock-on effect on the broader economy.
During the weekend, China’s authorities have also made several announcements to curb capital outflow, which showed signs of acceleration as a stronger US dollar squeezes China’s foreign reserves.
Under the new rules, banks and other financial institutions in China will need to report all domestic and overseas cash transactions of more than 50,000 yuan ( US$7,200), compared with 20,000 yuan previously. Banks will also need to report any overseas transfers by individuals of US$10,000 or more. Approved uses of funds were restricted to non-investment (securities and properties) purpose. The measurements will further suppress the individual’s  appetite for, and ability in engaging foreign investments.
DBS Group 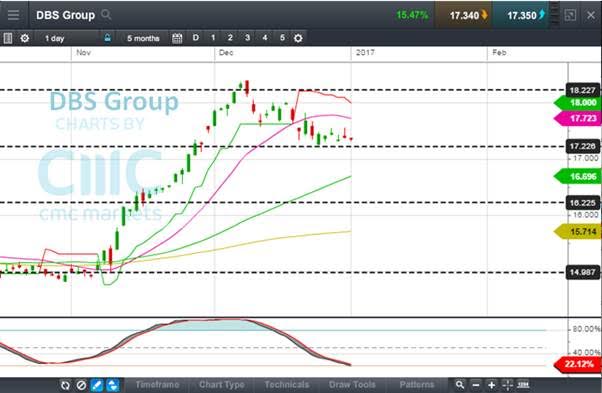