Buy on expectation and sell on news. This works on oil prices most of the times. Last night we saw another rally in oil prices in anticipation of OPEC members reaching a freeze plan in a meeting next week. In recent days, several OPEC members including Iran, along with non-OPEC member Russia, have suggested they were leaning toward a deal to limit output.

This becomes increasingly promising against a backdrop of a strengthening US dollar, which urges OPEC to reassess the necessity to support oil prices by cutting output. Before a deal is reached, this expectation will continue to support oil prices as well as the oil and gas sector. Today in the Singapore market, oil & gas names such as SembMar, Keppel Corp and Ezion opened higher.

Impacts of Trump win on Asian markets and currencies

Trump’s major policy is oriented with a goal of “American first” & “Making American great again”. By achieving that long-term target, he will need to cut down corporate tax and income tax and at the same time implement massive fiscal stimulus over the next four years. The market seems to be convinced about his plans thus we see funds flowing back to US equities, resulting in a sell down in EM equities and currencies.

Investors are trying to strike the right balance between positioning for a major dose of US fiscal stimulus and not getting too committed, given the uncertainty surrounding what policies the new Trump Administration will actually implement.

Yesterday, we saw a retracement in the US dollar index from its multi-year highs, signaling the dollar rally is probably running out of steam as the market seems to have fully priced in the “Trump effect” and an impending Dec rate hike.

If the dollar continues to retrace from this level, then we might see a bounce in EM currencies from here. 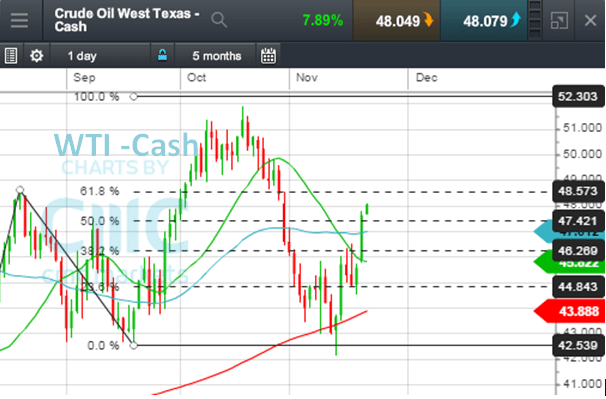