Offshore yuan declines to its lowest levels since 2010

The feeling of free fall has returned again. The offshore renminbi dropped to its record low against USD at 6.7870 this morning, extending declines after breaking a key support level of 6.7000 earlier this month. The “free fall” in the Chinese yuan was in line with other major currencies against a strong USD. The Dollar index has surged to seven-month highs as the case for a Fed rate hike by the end of this year has now become more convincing.

The move also signals the PBOC’s tolerance towards a weaker currency as the recent PPI and GDP data shows signs of stabilisation in the World’s second largest economy.  This has given the authorities more room to loosen up control of its currency and allow greater currency flexibility. The fast drop in CNH may trigger a contagion effect among emerging market currencies.

Separately, the recent property cooling measures implemented in the major tier one and tier two cities have greatly dampened investor’s ability and willingness to chase the overheated property market. Due to lack of investment channels in the mainland market, capital may once again flow back to the stock market or overseas. This will intensify the capital outflows and further depreciate the yuan in the offshore market.

Shanghai’s market surged 1.21% on Monday, re-testing key resistance levels at 3,130 after two months’ of consolidation. The trading volume was notably higher than its average daily volume, which is probably a good signal. Sectors including coal (+6.4%), cement (3.5%) and brokers (2.5%) were the outperformers.

Market sentiment has turned positive recently. The country’s PPI turned positive for the first time in four years, showing the prolonged industrial price contraction has come to an end. The Q3 GDP reading has also signaled stabilisation of the world’s second largest economy. With the authority’s recent effort to curb the overheated property market, free capital is more likely to flow back to the stock market.

Strong momentum in the A-shares market led to a bounce in Hong Kong shares despite a lower opening. The Hang Seng Index closed near 1% higher at 23,604 points led by energy and consumer sector. Four out of five stocks in the Hang Seng Index closed higher. Bank of China HK (2388 hk) rallied 4.45% ahead of earnings releases. Standard Chartered bank (2888 HK) also surged 3.46%. 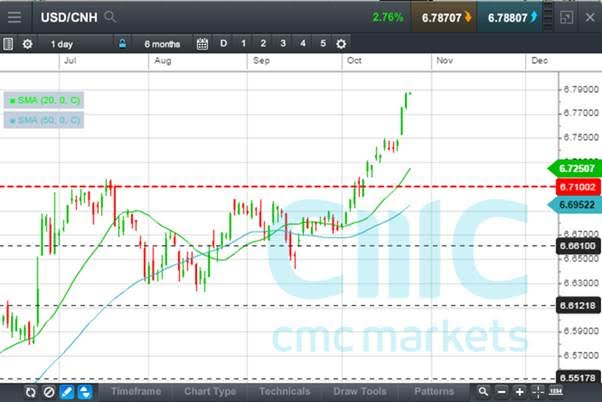