The issue of race relations in Singapore rearing its ugly head in recent weeks, starting with a CNA-IPS survey that suggested that racism in Singapore was not serious and now, constitutional changes to the Elected Presidency that would define qualification criteria along race lines. TOC thus decided to embark on its own investigation into race relations through the Five Question Survey (FQS) which aims to present data from a fairly large sample on a particular topic and allow for those interested within the community to analyse and interpret the raw data.

While the FQS report includes some observations, we recognise that the data can be interpreted in many different ways and TOC invites expert and novice researchers alike to conduct their own analysis and contribute to the discussion of race relations in Singapore, using the raw data that is provided at the end of the article.

The survey went live on 22 August 2016 and respondents were sought through TOC’s website and Facebook page which has over 86,000 supporters. Within the first four days, over 900 respondents had submitted responses and after eight days, the threshold of 1,000 respondents was crossed (see Ta 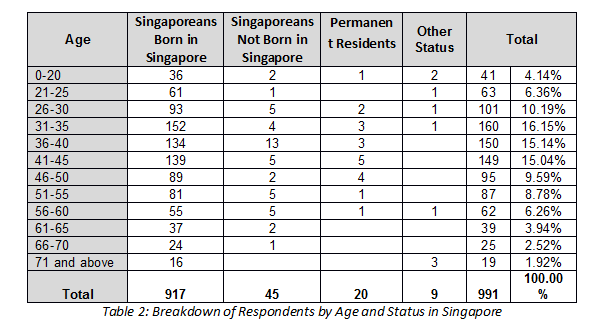 Of the remaining 991 responses, Table 2 provides the breakdown in terms of the age of these respondents. The largest proportion of respondents were found to be in the age band of 26-45 years (56.25%). Table 3 lists the breakdown in terms of their status in Singapore, namely whether they were born in Singapore or were naturalised Singaporeans, or Permanent Residents, or belonged to some other status such as employment.

As the number of respondents who were not born in Singapore was small in this sample (i.e. 74 respondents, representing 7.47%), they were excluded from the final analysis. This means that the findings here reflect those who have been born in Singapore and are likely to have spent most or all of their lives living in the society here. Figure A provides a graphical representation of the age distribution of these respondents while Table 4 presents the breakdown according to ethnicity of these 917 respondents (701 male and 290 female) who informed the analysis. 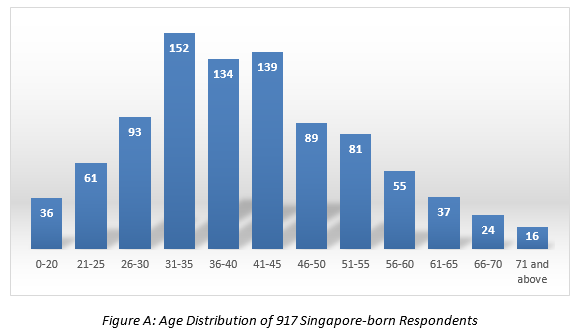 While the proportion of respondents in terms of the various ethnicities do not align with the breakdown of the resident population in Singapore (i.e. the number of Malay respondents and Indian respondents do not correspond to the population distribution in Singapore), the majority race proportion (74.48%) as compared to the other races (25.52%) is reflective of the ethnic breakdown between the ethnic majority as compared to the ethnic minorities as a combined group in Singapore[1]. Thus, the responses have been analysed on the virtues of a majority-minority split for easy reference.

There were three questions specifically on the topic of race relations investigated in this survey. The first evaluated the experience of being unfairly denied an opportunity and was described as “An opportunity denied could be in the form of a promotion due but not given, job role not assigned even though fully qualified, access to information being restricted or being excluded from a group”. This was intended to draw a baseline on general discrimination as experienced by Singapore-born Singaporeans from all walks of life.

The second question on the topic of race relations attempted to identify if the type of discrimination experienced stemmed from racial prejudice. Thus, the responses are based on the 435 respondents who indicated ‘yes’ in the preceding question. Respondents were asked to indicate on a scale of 1-10 if they felt that the denial of opportunity was in some way (explicitly or implicitly) related to racial profiling “based on your reading of the situation, based on your experience, even though other reasons may have been cited officially”. Figure B shows the breakdown of responses in terms of the value given according to this scale. As can be seen in Table 6, the opinion expressed by the sample appears to be a definite ‘yes’ in terms of a score of 10 (21.4%) or a definite ‘no’ in terms of a score of 0 (30.6%) for half the respondents, with the responses for the rest distributed fairly evenly across the scale. 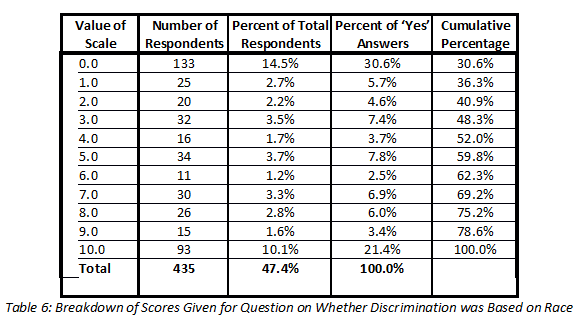 In terms of the average rating for this perception on whether race had something to with the denial of opportunity, the score for the sample was 4.47, putting it fairly in the middle. When compared across the majority/minority split, a significant disparity is noticed between how much weight is given to the probability that race was a reason in the discrimination (3.1 for the majority as compared to 6.9 for the minority), as shown in Figure B. 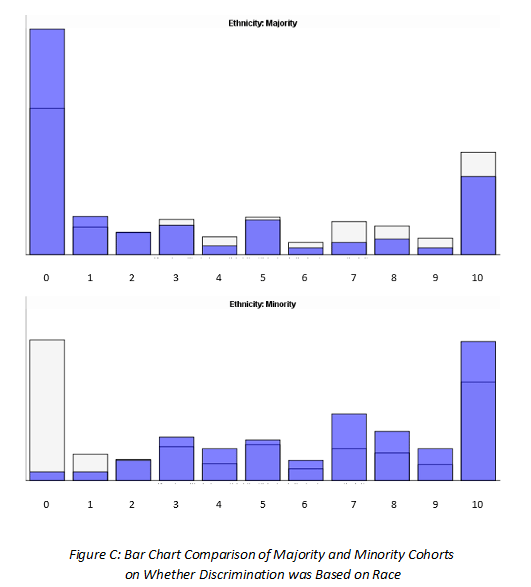 To further illustrate the extent of this disparity, Figure C shows the number of respondents who gave each of the ratings across the 0-10 scale, for the majority/minority split. As can be seen, the trend appears to be in opposite directions for each of these cohorts in terms of whether they consider race to have been a factor in the denial of the opportunity.

The third question on the topic of race relations explored the perception of ‘closet racists’. Using the idea that people may act in discriminatory ways that are unconscious and not intentionally racist[2], the question defined a ‘closet racist’ as referring “to someone who never acts in an overtly racist manner but there are subtle hints that their thought process is prejudiced against others of a different race than him/her. If you were to confront this person as a racist, you would have no clear evidence to corner them with. But ‘somehow’ you just know they are.”

The scale provided was based on five points with the extremes being described as ‘Have Never Come Across’ for a score of 0, and ‘See Them Everywhere’ for a score of 5. Exaggerated extremes were indicated to divide the responses into an absolute scale that could reflect 100% of the possibilities, as this question tapped on a subjective perception based on the culmination of experiences.

The scores for the entire cohort of 917 respondents sampled for this question is represented in Table 7 below. It appears that there were progressively higher scores given, with 73% of the respondents indicating a score of 3 or above, resulting in a mean score of 2.95 for the sample of 917 respondents.

In a further breakdown, the majority/minority split was separately compared for the cohort that had self-reported that they had experienced some form of denial of opportunity and the cohort that had not. The average scores for these sub-groups are listed in Table 8 [3]. 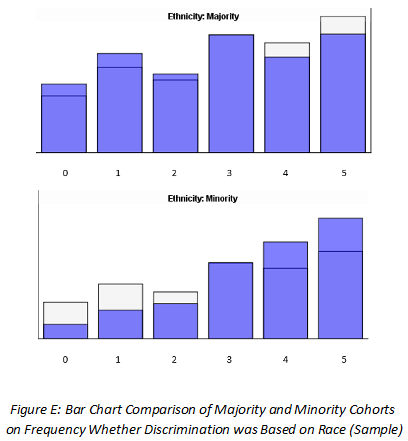 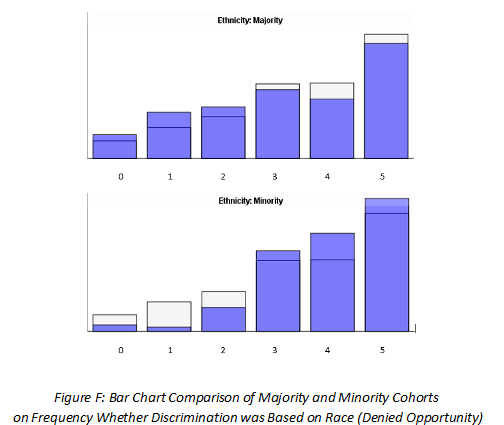 This report serves to state the findings faithfully and accurately as possible without making reference to what could cause such observations. The purpose of doing this is to provide the community with an opportunity to make their own inferences based on the data alone. A socio-political commentary of these findings will follow in a separate article soon. In the meanwhile, readers are encouraged to interpret these findings and formulate their own conclusions as to why there is a disparity of perceptions and experiences between the minority and majority race sub-groups of Singaporeans born in Singapore, in this survey.

While every effort has been made to document the process and implementation of this survey, the main criticism of this survey is that this was done online and the respondents who responded were, in some way, readers of TOC. While this may be true, it must be noted that TOC does not have a monopoly of pushing content on the public and therefore attracts both supporters and detractors who read the articles and also join as ‘fans’ of the TOC Facebook page.

Thus, considering that over 1,000 actual responses were collected before the analysis was done, and the fact that the demographic breakdown suggests that a fair distribution of people across Singapore society were represented (as far as Singapore-born respondents are concerned), it is hard to dismiss this survey entirely.

Except for those that are explicitly indicated, all statistical figures reported here are significant to 99.9%. The raw data of 917 responses (contained in an Excel spreadsheet) is also available for inspection and we welcome readers and other researchers who would like to review the findings to contact us. There is also scope to investigate further on comparisons between sub-groups that are based on age or gender.

We would like to thank the community which has come together to produce this survey – honest and frank responses are equally as important as sincere data analysis. It is hoped that this survey will help steer discussion on race relations towards a direction that brings us all together rather than fuel more divisiveness in our society.

The raw breakdown of the survey answers can be viewed here (note: the number of respondents recorded is 1,087 because the survey remained open until this article was published).

[1] According to Singapore Department of Statistics (page 5), “Chinese made up 74.3 per cent of the resident population in 2015, while the Malays constituted 13.3 per cent and the Indians formed 9.1 per cent.”

[3] Due to the low number of respondents in the minority breakdown of those who were never denied an opportunity, the comparison of the mean score between the majority and minority group in this instance was not found to be statistically significant.