Sentiment raised by PMIs and strong US new home sales

The Nikkei Flash Manufacturing PMI read 49.6 in July, higher than the previous month’s reading of 49.0 and also recorded the highest level in six months. Despite remaining below the contraction phase of 50, it signaled a continuous improvement in the country’s manufacturing activities amidst a strong yen and weaker global demand.

European equities rallied on Wednesday as Eurozone PMI showed signs of recovery. The Eurozone composite PMI was 53.3, beating forecast of 53.1. Germany’s manufacturing PMI reading of 53.6 was marginally higher than forecast. France’s reading of 48.5, however, was below the consensus of 48.8. Euro Stoxx 50 Index rallied 1.13% last night.

US market recovered last night as strong New Home Sales number fueled market sentiments. US New Home Sales rose to the highest level in nine years to a seasonally adjusted rate of 654,000, beating forecast of 580,000. Given the recent Housing Starts and jobs reports that revealed strong performance, the housing market’s momentum is picking up with support from newly created jobs and low mortgage rates.

Yet, strong housing data has led to higher speculation on the Fed’s rate hike decision. The implied probability of a 25bps rate hike in September rose to 28%, from 24% just one day ago.

Singapore’s July headline CPI remained subdued. The reading of -0.7%was lower than the consensus forecast of -0.5%. The lower reading was mainly due to decline in housing & utilities, transport and clothing prices. The core CPI, which excludes the costs of private road transport and accommodation, increased to1% y-o-y, which is in line with MAS’s 0.5-1.5% forecast range.

Trading in the rest of Asia markets was relatively quiet too. Hang Seng Index continued to consolidate after reaching a year-to-date high of 23,200 points last week. Volatility has dropped to the lowest levels since the EU Referendum and thus market is now more susceptible to potential impacts brought about by unexpected turn of events. 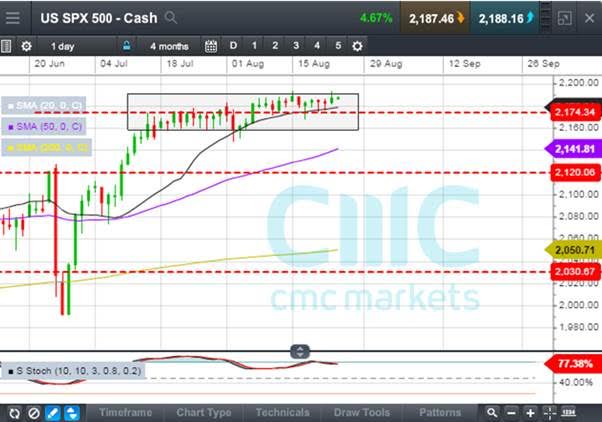