China announced its 2Q GDP data on Friday. Its economy grew at an annualized pace of 6.7%, unchanged from the previous quarter, and higher than the market’s expectation of 6.6%. Although this is still the slowest pace of growth since 2009, the economic slowdown seems to have stabilised.

If we breakdown the GDP into sub-industries, primary industry grew at 3.1%, secondary industry expanded at 6.1%, while the service industry grew at the fastest pace – 7.5%. This suggests that the fast growing tertiary industry is leading the economic growth and cushioning the downside of a slowing economy as well as industrial overcapacity.

The National Bureau of Statistics said that in the first half of this year, the complex domestic and international situation and continued downward pressure have weighed on economic growth. More efforts are needed in the expansion of total demand, speeding up the supply-side structural reforms and promoting public entrepreneurship and innovation in order to maintain a smooth transition of the overall economy.

US retails sales and industrial production for June were both better than expected, which helped to confirm strong second quarter growth of the US economy. The equity market, however, closed flat last Friday. This is probably because a week’s rally had priced-in too much optimism – from both fundamentals and also the expectation of more monetary easing from central banks.  The S&P 500 index tested a new high and is facing immediate resistance level at 2,160 area. 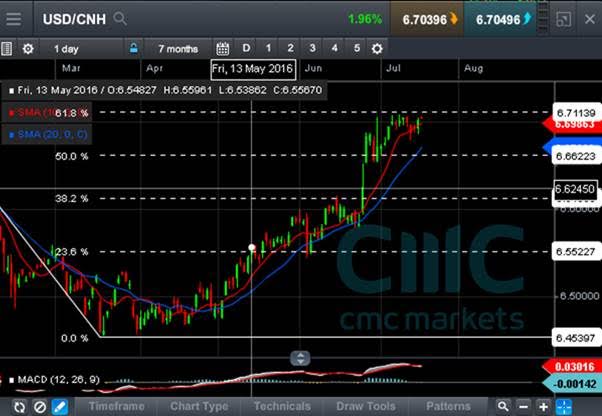