Statement from RC to residents at the The Peak @ Toa Payoh

It is earlier reported that the Residents’ Committee (RC) at The [email protected] Payoh wanted to build an RC centre at the void deck despite a majority of the residents had objected to this. (read more here)

Here is a statement from The Peak RC to the residents to clarify on the intended RC centre.

Please allow us to correct some of the prevailing misconceptions on the RC centre.

1. It is not true that 87% of the residents are against the RC Centre. Based on a door to door survey conducted by RC members in May/June of 2014, more than 80% of responding residents were in favour and gave feedback on the type of activities they would like at the RC centre. We note that the person(s) claiming that 87% of residents were against did not give details of their survey.

2. There will only be one RC centre. However to accommodate some residents’ concerns on safety and security, as well as to ensure sufficient lighting at the void deck of block 139B, the Centre was split into two smaller areas – one at Block 139B and the other at the Key Collection Centre.

3. RC centres are typically up to a floor size of 160sqm. In light of concerns by residents on lighting and security, the RC Centre was reduced to a total size of 77sqm + 72sqm (total of 149sqm).

4. A single location at the Key Collection Centre would not be sufficiently meaningful for the community. It is not big enough to accommodate community activities. This small site was only selected to allow the reduction of the space at Block 139b to accommodate some residents’ feedback.

5. Safety and security concerns have been addressed (which have resulted in a smaller centre at the primary location under 139B). The residents will continue to have their loading bays. All the relevant agencies, including the Fire and Safety Department, have approved the plans.

6. The only objection which has not been addressed is that made by some residents that the RC Centre will devalue their property. However, we note that RC Centres in all HDB precincts are located at void decks. This is no different.

7. The proposed uses for the RC centre include having a playgroup for young children as well as enrichment courses/tuition services for older children in the estate. There are also some ideas to open up one of the locations as a function room for residents to book for private events as an option aside from the Pavilion. The RC is confident that there is an appetite for activities and events for the RC centre by residents.

8. To help residents better visualise the RC Centre at 139b, we attach a 3D model of the revised centre. We have also put up a video that will take you through the lobby of 139b to the centre.

9. We thank residents for their feedback, which has resulted in significant changes to the original plans.

Thank you for your kind attention.

However it is noted that a RC member acknowledged on 15 March at the RC’s facebook page that more than 70% is in opposition to the construction of the RC center which differs from the statement issued by the RC that more than 80% of responding residents were in favour. TOC has written in Mr Hri Kumar to seek a response on this.

Update: According to the reply by the RC member, she said that she was referencing what was said by one of the objectors.  That was not her figure and she did not agree to it. 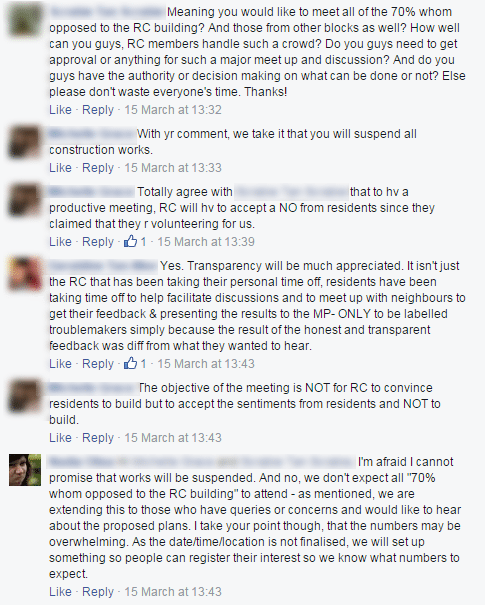