Rice with fish curry and a piece of fish - Terry Xu

A report by TODAY shares the ongoing study by researchers from the National University of Singapore (NUS) and HealthServe, a non-governmental organisation (NGO) about the poor nutrition of meals catered for foreign workers.

The report goes on to state the following points of the meals that are catered by the foreign workers.

The report also covered the point of workers not being able to cook their own meals as there is no cooking facilities in many of the dormitories in Singapore.

It is written that an industry insider, Mr Lim said some caterers are offering cheaper packages and cut back on the quality and quantity of the food.

What is also not said in the report is whether the cost of catering is factored in the salary of the foreign workers.

The public’s response to the report is largely sympathetic towards the situation of foreign workers, asking for government authorities to look into the living standards of foreign workers and ensuring that our nation builders are better cared for.

The issue with this thought provoking report

Well, the issue I have with this otherwise wonderful insightful report is that while it generates a much welcome sympathy and attention from Singaporeans about the plight of the foreign workers but at the same time, it seemingly directs the blame of such mistreatment to “profiteering” catering companies and “unscrupulous” companies that hire such workers.

The comment by Holland-Bukit Timah GRC Member of Parliament Christopher de Souza featured in the report, to me, gives an impression to the average reader that the government is looking much into the condition of the foreign workers.

Given that this problem is more than a decade old, it is troubling for me to know that people have only just been made aware of the issue or having the assumption that the government has started to look into this “new” problem of the foreign workers.

But what is not written is how the Ministry of Manpower (MOM) is implicated in the whole issue.

Let us look at the work permit levy that the companies are subjected to. 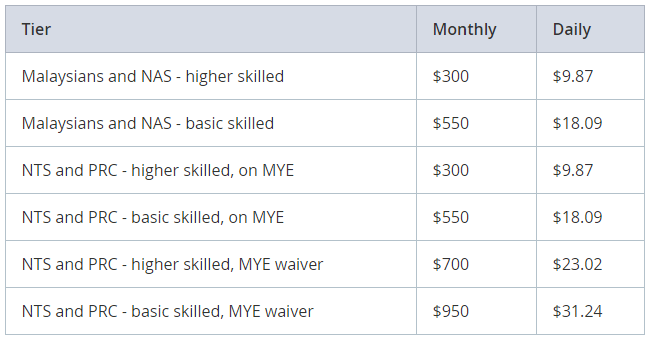 For workers who are from non-traditional sources (NTS), India, Sri Lanka, Thailand, Bangladesh, Myanmar, Philippines and People’s Republic of China (PRC), companies will need to pay up to $950 in levy for their foreign workers.

So, coupled with lodging, insurance and other expenses, a company has to pay about or more than two thousand dollars just to hire a worker with a $700 monthly salary.

As the work levy increase the expenditure of companies, companies cut wages and welfare to lower operation cost. Bear in mind that, while profit increases over the years, the increase in relation to rent, COE, fuel and other expenses are not proportional.

For the worker, apart from buying daily necessities, sending money back for living expenses, they also have to pay off their agent fees. So what is left of the amount is meant for food.

Lesser money for catering, lesser wages for better meals. Simple as that.

“Pay more so that foreign workers can be paid better!”

The Singapore government and the mainstream media routinely throw out this argument that better treatment/welfare for workers means that the end-consumers have to pay more.

We all know that increase of prices are more than often not in direct correlation with the increase of wages. For example, 10% price increase does not mean the companies will pay the additional 10% revenue as wages to the workers.

Also, people may think the companies are the ones profiting from the whole foreign labour policies. But think again, the government are the ones who benefit directly from the employment of foreign workers.

That is the last known amount for the total work permit levy collected in Financial Year 2011. How much does the government earns now is really much for one’s wild guess.

When companies earn more with the increased cost to consumers, the work levy can go even higher without the companies going bust. In fact, companies are pretty much held ransom by the government on the issue of work levy.

If Singaporeans buy into the idea that locals will not take the low-end jobs such as construction workers. Then how does increasing the financial strain on companies to hire foreign workers with high levies work to promote local companies to hire workers to meet their demand?

Looking at the simplified chart above, an employer don’t necessary save a lot when it comes to hiring of foreign workers. And even if it were to use the amount it pays for foreign worker to hire a local, a local might not be keen on taking the job due to the relatively low take home pay and nature of work.

If based on what some may have proposed, to have more stringent rules and checks on companies to ensure better food for the workers. Life may not improve as well as what these people may hope.

So despite the huge amount of indirect tax upon foreign workers, what has MOM done to improve their standard of living apart from pushing the responsibility to companies who hire them?

More issues to worry about than nutritional value of meals

There are companies out there which routinely swindle and mistreat foreign workers who travelled far to Singapore, looking for a means of livelihood so that they could earn a pittance to send money back to their family. Such cases are well-documented by non-government organisations such as TWC2 and HOME.

I still cannot forget the story that I did last year, about a group of foreign workers here in Singapore as town council cleaners at Pasir Ris Punggol GRC.

Made to pay $10,000 in agent fees and work seven days a week, more than 12 hours a day for a mere $700 monthly salary. These workers were eventually sent back home because they refused to pay another sum of agency fees which was demanded by the cleaning company.

This story continues to haunt me till today as I was simply helpless to prevent them from being unjustly dismissed by their company even though I was fully involved in the case. They had no way for seeking recourse for their treatment. MOM said that the workers had to lodge the complaint at their headquarters, never mind the fact that they work seven days a week, and MOM is not open after office hours.

My heart goes out for NGO workers like Jolovan Wham from HOME and Alex Au from TWC2, along with the other unsung heroes from the NGOs who slog out on a daily basis to fight against injustice and better welfare for foreign workers with worse situation that I have seen.

Whether is it unlawful confinement, dumping of workers after they get injured from their work, being owed of months of salary, swindling of agent fees, the list goes on for the kind of injustice and issues foreign workers are faced with.

Many of such cases end up with workers having to leave the country before their cases are resolved because the pro-business approach that MOM seems to adopt. When complaints come, it is always the same argument. “The worker’s word against the employer’s.”

Great place to work but at what price?

As I was worked in a fire protection company for three years, I had the opportunity of interacting closely with many Indian and Bangladeshi workers, work with them, nap with them, eat with them and talk about their life.

Yes, Singapore is a great place for many of these people to come and earn a living but at what expense?

All of the workers whom I worked with, do not have the luxury of seeing their children grow up or even be there when their wives were in labour. Every two years when their work permit is up, the workers are entitled to return home to visit their family with a company paid ticket. They then have the option of deciding whether to return to Singapore to work for another two years away from their family.

On food issues, as what I recall with my workers, they settled their meals. As their wages were not deducted for catering, they could choose their meal options. Choosing to cook their breakfast and lunch together at the dormitory after paying an additional $50 dollars to the dormitory from their pocket; or to pay simply $150 for catering to provide their three meals, which is a piece of stale fish and fish curry to go with plain rice (for practically close to everyday and every meal).

What I understood from them is that their choice of food was largely influenced by how much budget they have left from their salary after they remit allowance to their family in their home country.

What people can do about the plight of foreign workers

So, for those who are crying for the foreign workers over the nutritional value of their meals, my word of advice is to get over it. The workers have far important matters to be concerned about than to think how nutritious their meals are. Like whether they would have enough to send back home for their family, if their bosses would fire them without any reasons if there would be enough overtime pay to supplement their low starting wages etc.

If you really want to do something for people who build up our country, write to your MP and say that you are concerned about the welfare of the foreign workers and hope that something could be substantially done about their situation.

If you find that simple task to be of a hassle, then please just stop it with all the wailing about just how “poor thing” are the foreign workers in Singapore, because they don’t need your superficial sympathy.

Because the last thing they want is the government to step in for their “sympathetic voters” and ask for “better welfare” from the companies. Resulting in the companies to subtract a sum from the pitiful salary of the workers to “improve” the standard of their food.