SBS Driver drove off with my 3 year old daughter The following is a complaint sent to SBS on 6 February 2015 forwarded to us by one of our readers, who wishes to remain anonymous. We have verified her identity and confirmed this complaint has been made. SBS has not replied since. 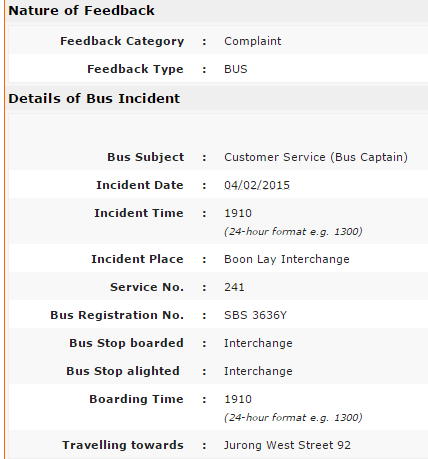 I would like to lodge a complaint against Bus Captain Zheng Quan Gang (61037).

On the 4th of February 2015, 7.10pm, I boarded his bus 241 (bus plate number: 3636Y) at Boon Lay interchange with my 3 year old daughter. After boarding, I realised that my daughter has dropped her personal belongings right at the pick up point. I approached the Bus Captain to seek his help in opening the door just for a moment. This was communicated to him in Mandarin.

He reluctantly opened the door for me. As I alighted from the bus, to my horror, he shut the door and drove off with my daughter who is still waiting for me in the bus!

I ran to the control station at the bus interchange to locate the bus. While explaining the situation, I was soon surrounded by a group of bus drivers. A bus driver made an insensitive comment and referred to me as another mother who does not know how to take care of her young.

Thankfully, the incident ended well with my daughter alighting on her own at our stop.

I would like to now bring your attention to 2 matters.

I deliberated on writing this letter till now in the hope that I would be able to allow my anger to recede before I penned my feedback. It has not. Many times have I wanted to post this matter on facebook and alert everyone of SBS transit’s actions. But I have not done so (for now) as I would like to believe that I can trust the official feedback channel in ensuring a very just outcome to my trauma.

Feel free to contact me at xxxxxxxx should you have any further clarifications to make. I would really expect one of the senior management to contact me with a fair resolution and outcome.

Update: In response to comments made on the article. The mother has sought to clarify a few points.

1) She did not know if the bus captain is a PRC or a Singaporean Chinese, she merely choose to use mandarin as a second language to communicate in seeing that the person is a Chinese.

2) The mother approached the bus captain to ask to stop the bus for a while when he was just about to move off and said that her daughter had dropped her belongings at the bus stop.

She said that the bus captain obviously is aware that she was with her daughter at that point and he is clearly unhappy that he had to stop the bus for her.

3) While she was at the control station asking for help to liaise with the bus which carried her daughter on board. She informed her father-in-law to wait at the bus stop where they were supposed to alight at.

This is possible because it is a long ride from where they boarded the bus and the mother was very upset because the daughter was left alone by herself for the whole journey.