YP – reigniting the “voice of a generation”

A video by the youth wing of the ruling People’s Action Party (PAP), which is making its rounds online and is being ridiculed by many, is the second production by the party to run into trouble in recent years.
Back in 2009, the Young PAP (YP) created what the media called a “blockbuster” video and the YP had planned to show it at a recruitment event.
However, just hours before the event took place, the video had to be withdrawn – because the censorship board within the Media Development Authority (MDA) had not approved it for public screening.
According to a TODAY report then:

“Based on an adaptation of Jonathan Reed’s Lost Generation – a poem about the current state of society – the video, according to YP, was also to showcase its media in-house creative team as ‘a growing force’ and to reflect the ‘changing face’ of PAP’s youth wing as the ‘voice’ of a generation that wants to ‘male their difference heard and seen’.”

The YP’s then chairman, Teo Ser Luck, told the media at the time: “Social media platforms will play quite an integral part in the campaigning in the future, and in everybody’s election strategy. So we have to take it seriously, especially to engage the younger generation.”
When asked by the media when the film was submitted for clearance by the authorities, all that the YP would say was, “We are still awaiting clearance.”
The video, which had been uploaded onto Youtube, is no longer available today.
In its latest video, the YP has come under fire mainly for a badly-produced and “robotic” presentation, far from its stated claim of “reigniting the passion of servant leadership”.
However, questions have also been raised if this latest video, which is available on Youtube, has been approved by the authorities for public screening as well.
“Is the PAP’s YP film now being distributed online a contravention of the Films Act?” Ms Bertha Henson, former Associate Editor with the Straits Times, asked on her Facebook page.
“Will MSM go ask the MDA?” she asked, referring to the mainstream media. “Even if it doesn’t, will MDA just respond becos of the ‘disquiet’’? If the MDA doesn’t, will the PAP clarify? It’s no longer a case of it being a ‘bad’’ video, but whether it is an ‘illegal’ one.”
In 2009, the government amended the Films Act to allow political “films that are factual and objective, and do not dramatize or present a distorted picture of politics in Singapore.”
“Films with animation and dramatization and distort what is real or factual will be disallowed, as the intent of the amendments is to ensure that these films do not undermine the seriousness of political debate,” said Lui Tuck Yew, the then Minister for Information and Communications.
Filmmaker Martyn See, however, observed that fundamentally nothing has changed. Mr See’s film, Singapore Rebel, about opposition politician Chee Soon Juan, had been banned by the MDA for more than four years, until it was lifted also in 2009.
Mr See wrote on his blog here: 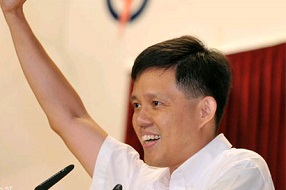 “Section 33 prohibits the making, exhibition, distribution and import of ‘party political films’, which are defined as videos or films that makes ‘partisan or biased references to or comments on any political matter.’ It also states that the penalties for such an offence is a conviction to a fine not exceeding $100,000 or to imprisonment for a term not exceeding 2 years.
“In general, the above has not changed. It still applies.”
The chairman of the Young PAP is the Minister for Social Development and Family, Chan Chun Sing.