The PM vs Anonymous 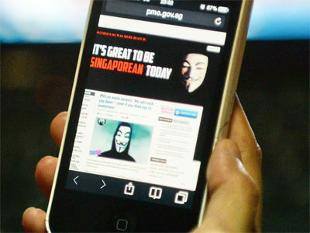 “For a fleeting moment this morning, the Prime Minister of Singapore will walk into his office an ordinary citizen. He will wonder if his email is secure, if his conversations are really private, if his protectors can be trusted, and if the iron in his rice bowl is really porcelain.”

That’s a status update by Singaporean filmmaker, Martyn See, on his Facebook page on Friday.

He was apparently referring to the news that a page of the website of the Prime Minister’s Office (PMO) had been hacked into the previous night. The hack was evidently carried out by Anonymous, a global hackers collective.

Here’s what Anonymous, with its signature picture of a Guy Fawkes mask, a symbol of anti-establishment defiance worldwide, left on the PMO page:

As reported by AFP:

“Next to it was another image saying: ‘PM Lee warns hackers: We will track you down — even if you think you’re ‘anonymous’.”

PM Lee’s warning was issued on 7 November, almost a week after a page of the Straits Times was hacked by “The Messiah”, and more than a dozen government websites went down in what the Infocomm Development Authority (IDA) had described as “planned maintenance.”

The co-chairman of the Cyber Security Awareness Alliance, Mdm Shirley Wong, had rubbished suggestions that the websites had been hacked.

“It was clear it was not an attack by hackers,” she said. “If it were, they would have proudly proclaimed it.”

Mdm Wong’s and IDA’s explanations, however, convinced few, especially online commentators who continued to wonder if there was more to it than the government was willing to divulge or admit to.

A day after Mdm Wong’s dismissive remarks, Yahoo Singapore reported that it had contacted “The Messiah” who claimed responsibility for the shutdown of the government sites.

“We reached out to our comrades from other fractions who together with us performed DNS poisoning on the .gov.sg sites, taking them down for a period of time,” Yahoo reported The Messiah as having said. (Seehere.)

The IDA has not responded to the claims. Neither has Mdm Wong.

PM Lee had said that the government took threats to harm Singapore’s IT infrastructure “very seriously” and “will spare no effort to try and track down the culprits.”

“And if we can find him, we will bring him to justice and he will be dealt with severely,” he said.

PM Lee’s warning only fuelled speculations further, with some asking why he is talking of “hunting down” the “culprits” when the government websites had gone down because of “planned maintenance” and not because of any illegal hacking.

Be that as it may, things have now taken a more “personal” turn – with Anonymous hacking into the PMO’s webpage on Friday morning, even leaving a pejorative word on the hacked page.

It is a direct challenge to PM Lee – and indeed the Government will now have to “spare no effort” in “hunting down” the hacker. Else, the PM’s words will be seen as nothing more than empty bravado. Worse, his entire government will suffer from a lack of credibility if the PM or the authorities are unable to fulfil the pledge made by the PM.

But the question which some are asking is this: should the PM have issued the warning and to do so publicly, and in the process, risk his and his government’s credibility?

One view is that the PM needed to lead from the front, and thus issuing a warning is right. Also, such a warning may stave off further threats – the signal coming from the very top that the government will “spare no effort” is, no doubt, meant to express the seriousness with which the government takes the matter. And no one should fool around with the PM’s office.

Another view is that the PM should not have issued such a warning but could have just given a reassurance to the public that the government was on top of things. Issuing a public warning only raises the stakes, it is effectively a challenge to the perpetrator. Some say this could be a “flushing-out” tactic, to bait the perpetrator into committing more hacks so that he can be traced easier.

Whatever the reasons behind PM Lee’s warning, apparently Anonymous is not deterred. In fact, it has intruded into the lion’s den, so to speak.

There are a few things which perhaps we should keep in mind when dealing with such threats.

One is to be aware that Anonymous is a collective which members are spread out across the globe. So, in a sense, you cannot “hunt down” such a group, unless you bring in the collective itself which is quite impossible. You can try and “hunt down” an individual, the one who actually hacked into the PMO site, for example, and bring him to justice. But history has shown that Anonymous is not deterred by this either. The group was born out of an Internet Image Board or forum in 2003, called 4chan. Through the last 10 years, some of its members have been arrested and jailed. But the collective carries on till this day. Undeterred. Worldwide.

It is, if you will, a new kind of challenge which governments all over the world are trying to come to grips with. But issuing an open challenge, like PM Lee did, is perhaps not the wisest thing to do.

Singapore, being a global IT hub itself, is a crown jewel of sorts for hackers, one might imagine. To bring down the system here, which itself is no easy feat, would be seen as a major victory in the hacking community.

What the government should do is to work quietly behind the scene to make sure our IT infrastructure is sound and well protected. That’s the top priority. At the same time, there is nothing to stop it from also “hunting down” the perpetrators or those who threaten to do harm to our infrastructure.

It will not be too late for the government to claim credit if and when it has apprehended the perpetrators.

For the time being, it should refrain from issuing public warnings or threats of its own. It does nothing except to inflame the situation, and put at risk the trust and credibility which Singaporeans (and others) have in the government by raising expectations of the capture of “Anonymous” or The Messiah.

And the longer the government is unable to do this, the more doubts will be raised about its capability to deal with such threats.

Calm down and don’t over-react. Keep the bravado in check.

It is a lesson which PM Lee could learn from the example of Minister Vivian Balakrishnan, who issued threats in June to expose the companies responsible for the haze in Indonesia.

It’s been 5 months since Dr Balakrishnan issued those threats and made that pledge. However, no company has yet to be named.

Now, Singaporeans expect the government to apprehend the culprits in this latest series of hacking incidents, given PM Lee’s strong words and vow.

Nothing less will do.

In other words, PM Lee is saying to Anonymous:

It’s game on: the PM vs Anonymous.

The clock is ticking.