What makes a good political leader?

A lot of readers have asked me about my political orientation which they find hard to guess because I am usually quite balanced in my views. As of now, I am ‘non partisan’ and my beliefs resonates with that of Deng Xiao Ping, “不管黑猫白猫,能捉老鼠就是好猫” (It does not matter if a cat is black or white, as long as it can catch mice, it is a good cat)

I personally prefer to focus on policies made, qualities a leader has, rather than party affiliation.

A question I have been wondering about is what kind of political leader do Singaporeans want to see? Do we just want someone who is charismatic and knows how to present themselves well? Or, are other qualities more important?

I believe thinking about such questions will help us make better electoral choices – what kind of Singapore do we want?  What qualities are needed in a leader to take us there? 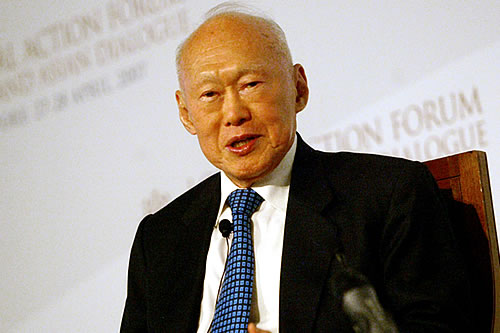 In an article on IPS Commons, the author, Devadas Krishnadas, shared five traits of political leadership that he felt was important, drawing examples from former MM Lee, S. Rajaratnam and Goh Keng Swee.

1) Serving a Higher Cause
“They fought for something larger than themselves – they fought for the idea of a nation and then set about making it happen”
Besides setting high goals and working actively towards it, the three also had to get the public to believe in it and work in that direction too.

2) Sincerity and Conviction
“All these men were men of conviction. They deeply believed in what they were doing and put their reputations and their very lives on the line. This conviction communicates itself intuitively. Anyone watching, listening or even simply reading the text of rally and stump speeches can feel the energy and sincerity of their beliefs reaching out across the arc of time. These were charismatic men, each in their own way, was fascinating to observe and to engage.”

“They ran the danger of challenging both the colonial authorities as well as the ruthless Malayan Communist Party. They did not flinch from their stand but pressed home their position with ever greater intensity.

Praxis is the putting of ideas into action.

“Lee, Rajaratman and Dr Goh were not merely pragmatists, they firstly men of ideas. A review of their writing and pronouncements in the critical period of 1950s-1970s will show clearly that they thought deeply about the condition on Man, the role of the State and developed political principles to guide their policy action.

And they were far from shy with their ideas – indeed, the first political battle fronts were ones of ideas to be followed only later by campaigns of execution”

5) Focusing on the interests of the people

“These pioneers kept their focus on the interest of the people. The object of their political will and their policy energy was to improve the lot of the masses. Things extraneous to that focus were avoided”

What I think is important

I second all the points which the author cited. As for the part on courage, I believe that there are more aspects to courage than those the author suggested.

Courage is also daring to say things that are unpopular and daring to disagree… not for the sake of it but because one truly believes in it and has rational reasons and evidences. I do not want a leader who makes policies that are popular just for the sake of being popular. In the best case scenario, he can make the most rational and most popular policies. However if I can only choose one, I will choose ‘rational’.

As Lee Kuan Yew said “Only those count and matter who have the courage of their convictions to stick up and stand up for what they believe in , for their people, their country, regardless of what happens to them.”

Goh Keng Swee also had that. As Lee Kuan Yew described him “When he held a contrary view, he would challenge my decisions and make me reexamine the premises on which they were made. As a result, we reached better decisions for Singapore”

For instance, if a leader wants to solve the problem of teenage pregnancy, it is not only important for her to be well versed in the fundamental sociological reasons as to why this situation arises, how other countries have dealt with it and case studies but to also interact with people who are facing this problem themselves. This will help  to understand these things in a real-world context and on a deep level and to be able to empathize with the people.

The word “empathy” brings me to my next point. A good leader has to be in touch with the ground. Like I mentioned in my previous post, a government official is someone the people say through taxes to serve their needs, therefore it is important for the official to now their needs if not they cannot serve them. Through interaction with the ground, a leader can understand the effects of his or her own policies, and know what the people want, so he can represent their voices in parliament.

In order to facilitate interaction, I think it is critical for a good leader to possess good communication skills – written and spoken. In this way, he/she would be able to interact with the public better. It would also be good if leaders can interact with and respond to alternative media. Many public institutions and leaders only seem to respond to mainstream media and I feel that it is not a good idea to discriminate as many people trust alternative media as well.

By responding more, a leader can facilitate greater communication and understanding and swiftly deal with any misunderstandings netizens may have against him or her.

Another hallmark of strong communication skills is the ability to put forth one’s ideas in a clear succinct manner, and in terms where most people will be able to understand.

One of my favourite quotes from Lee Kuan Yew sums this up well “What I want to discuss is the importance of simple, clear, written English…Do not try to impress by big words. Impress by the clarity of your ideas.”

This was something the late Goh Keng Swee was also able to do. Many writers or speakers attempt to come across as ‘intelligent’ by throwing in a lot of ‘cheem’ words or using jargon. However, if one’s desire is to educate and inform, then he should do his best to express himself in a simpler way.

What I found was remarkable – Dr Goh did not so much deliver budget addresses but verbal essays on the meaning and purpose of his economic plans. They were also the epitome of plain speaking. Witness the title of one of his first budget speeches – “This is How Your Money is Spent” (Budget Statement to the Legislative Assembly, 1960)

He found the time to personally prepare supplementary essays to companion his budget speeches as well as publish several books, such as The Economics of Modernisation and The Practice of Economic Growth, which articulated his economic thinking in full detail.

At a time when educational levels were a shadow of what they are today, Dr Goh took as his audience not only the expert but also the layman. His approach was not to dumb down his message but to lift up his audience to the required level of understanding to appreciate both the complex challenges but also the complications of policy. While he actively recruiting talented Singaporeans to serve in public service Dr Goh was adamant that the first and foremost beneficiary of growth must be the common man.

I value the above traits too… What about you? What do you value? Share your thoughts in your comments on this post!

Statistics that keep getting better?