Report from the Straits Times: 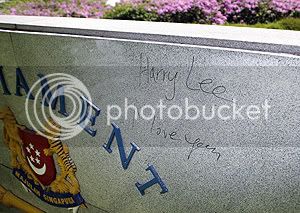 POLICE yesterday arrested a man in his 40s for vandalism, after a wall outside Parliament House was defaced at lunch hour.

Scribbled in black marker on the top right corner of the wall were the words: ‘Hi Harry Lee. I love you.’

Minister Mentor Lee Kuan Yew is called Harry by some of his family and old friends.

The wall, located at the junction of North Bridge Road and Parliament Place, is about the height of an average man. It serves as a signboard and has the Singapore Crest and the words ‘Parliament’ and ‘Singapore’ on it.

At about 1.30pm yesterday, uniformed guards were seen running out of Parliament House to nab the man while he scribbled on the wall.

They wrestled to the ground the medium-built man, who was wearing a red T-shirt and brown trousers.

It took three guards to subdue him as he refused to be pinned down and tried to wriggle free.

Read the full report in the Straits Times.