KUALA LUMPUR, MALAYSIA—  Customers are traumatised to discover footages of them changing clothes taken by a hidden camera in the fitting room at an H&M outlet, and being sold online.

The Malaysian arm of the multinational fashion retailer has lodged a police report, and investigations are currently ongoing.

She shared a screenshot of the seller’s post, showing five individuals in fitting rooms, supposedly in one of the H&M’s outlets.

“I found the picture floating around online, and from my understanding, these videos are being sold on Twitter, and people have already purchased them, ” she said.

@meleisgw added that someone said these videos were originally advertised on the MeWe application. 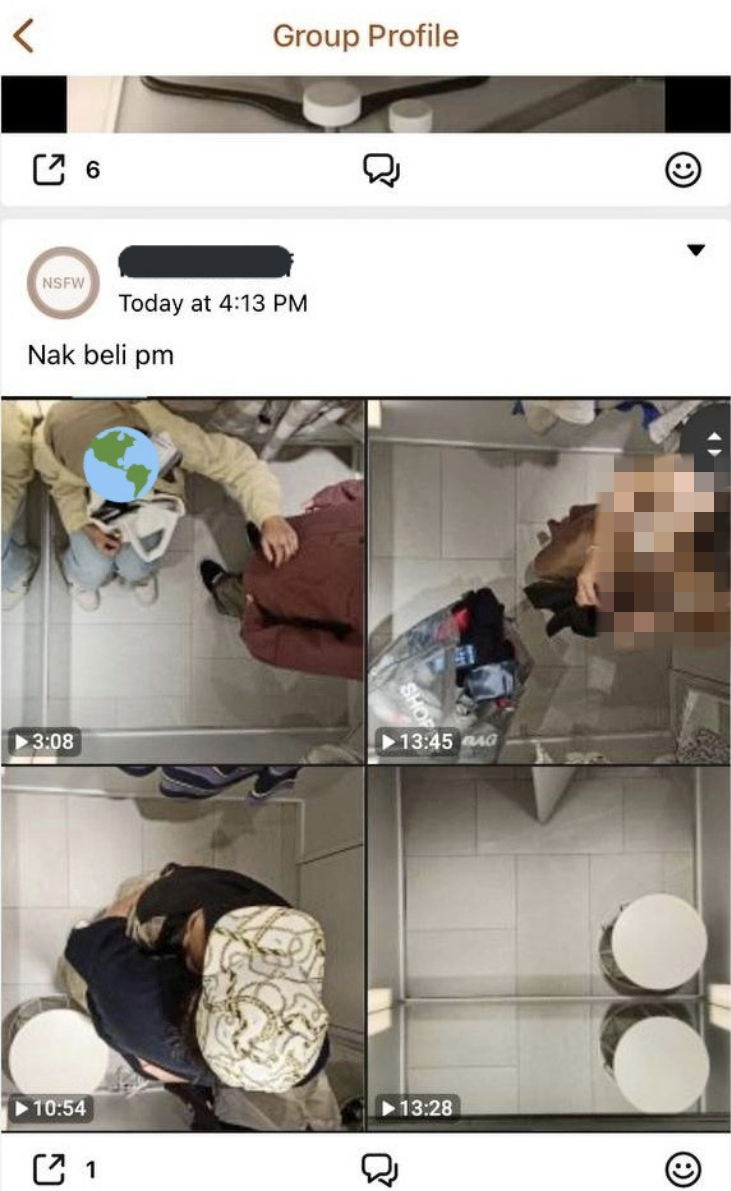 Victim reached out to @meleisgw, asking for help to locate the source of the video

Another anonymous user had personally messaged @meleisgw, asking for help to locate the source of the video, “One of the people in that video is me, it caused embarrassment when it was posted publicly.” A search on Twitter also shows several posts claiming to contain the leaked footage in H&M’s fitting room, attached with suspicious video links, which lead to dubious content and not the actual footage: On Wednesday (11 Jan), H&M confirmed that they have lodged a police report over the concern that hidden cameras in their outlet’s fitting room.

“We have conducted an inspection of all fitting rooms and are working to ensure that there are no security breaches that will compromise the privacy of our customers,” said H&M Malaysia.

“The safety of our customers is of the utmost importance to us. A police report has been made, and investigations are currently ongoing.”

He said the security manager saw a message about the hidden cam footage being circulated on WhatsApp.

“An 11-second video from the hidden camera was uploaded to Twitter, ” he said.

Noor Dellhan said the case has been classified under Section 509 of the Penal Code for intentionally insulting the modesty of any woman by word, through sound, gesture or object.

Police personnel were sent to the said outlet to investigate but could not find the camera. He suspected that it happened at another location.

“I want to assure the public that we are taking this matter seriously and will conduct a thorough investigation to bring those responsible to justice,” he said.

Other netizens had commented on H&M’s official page, expressing their disappointment over the hidden cam incident, saying that they would refrain from shopping at the company’s outlet.

Some netizens questioned the retailer why there was a camera in the fitting room and urged H&M to do something to safeguard the privacy of their customers:

While Eric Ng pressured H&M to disclose the list of branches in which hidden cameras were found:

Others also suggested that H&M should make daily checks on all the fitting rooms with device detectors as SOP in the outlet:

For just US$7.50 a month, sign up as a subscriber on The Online Citizen Asia (and enjoy ads-free experience on our site) to support our mission to transform TOC into an alternative mainstream press.
Tags: H&M