by The Online Citizen
in Editorial
Reading Time: 5 mins read
19

Singapore has recorded about 2,866 imported cases of COVID-19 between 1 January this year to 11 June, of which arrivals from India and Indonesia make up about half of the cases – 1,064 cases and 551 cases, respectively.

The city-state has entered into a series of lockdown measures starting from 16 May, after a number of clusters, including the Changi Airport clusters, emerged in the community.

This had led many Singaporeans to question why the Government did not shut Singapore’s borders earlier to bring down the number of imported COVID-19 cases, especially after the mutant virus variant B1617 ran amok in India.

In response to the public, the Ministry of Manpower (MOM) issued a statement on 18 May saying that Singapore has “completely stopped entry of all from South Asia” since 2 May.

“At the same time, businesses have been appealing for more workers to be allowed to enter Singapore to address manpower shortages,” it noted, shifting the blame to businesses.

MOM added that the outflow of migrant workers has exceeded the inflow over the past year; and as a result of border restrictions to mitigate importation risks, Singapore has not been able to adequately replace those who have left.

“Border restrictions will impact Singaporeans’ daily lives and this will be felt more keenly in the coming weeks and months,” the Ministry said in its statement.

“Our restrictions on inflow of workers from higher-risk countries will also likely persist for some time, until the situation improves.”

Meanwhile, TOC’s tabulated figures revealed that the majority of imported cases in Singapore came from India with 1,064 total cases (37.1%), followed by Indonesia with 551 cases (19.2%).

Bangladesh came in third with 291 imported cases, followed by the Philippines and Myanmar with 175 cases and 121 cases, respectively.

In addition, there have been 114 imported cases from the United Arab Emirates (UAE), and 110 cases from Malaysia during the same period.

Speaking at a press briefing in May, Minister Lawrence Wong, who co-chairs the multi-ministry taskforce on COVID-19, explained that Singapore did not close its border to India earlier as the country requires migrant workers to “build our homes”.

Mr Wong said, “We’ve already become very tight, to the point that the backlog of applications has been growing… Many projects have been suffering from delays, as all of us know.

“More recently when we restricted the flow of workers from India and the entire South Indian continent… it means considerable delays will be added to all of our projects.”

He added, “Some of our housing projects may now be delayed by up to a year or more. So it does come at a considerable cost to Singaporeans.”

Though Mr Wong assured that migrant workers who travel into Singapore are isolated, he conceded that there will be leaks into the community from time to time.

The Minister also asserted that there cannot be sole reliance on border measures.

Majority of work permit holders are actually from Indonesia

In a dialogue session at the Singapore Perspectives Conference in January, Mr Wong pointed out that the two largest groups entering Singapore are construction workers and foreign domestic workers.

“Those are the two largest sources of travellers coming to Singapore, and the daily numbers have not increased, they’ve been about the same in recent times,” he said.

Mr Wong continued, “Why have the numbers gone up? It’s simply because the prevalence rate, the incidence rate of the disease is much higher. Now, the virus is raging in countries everywhere.” 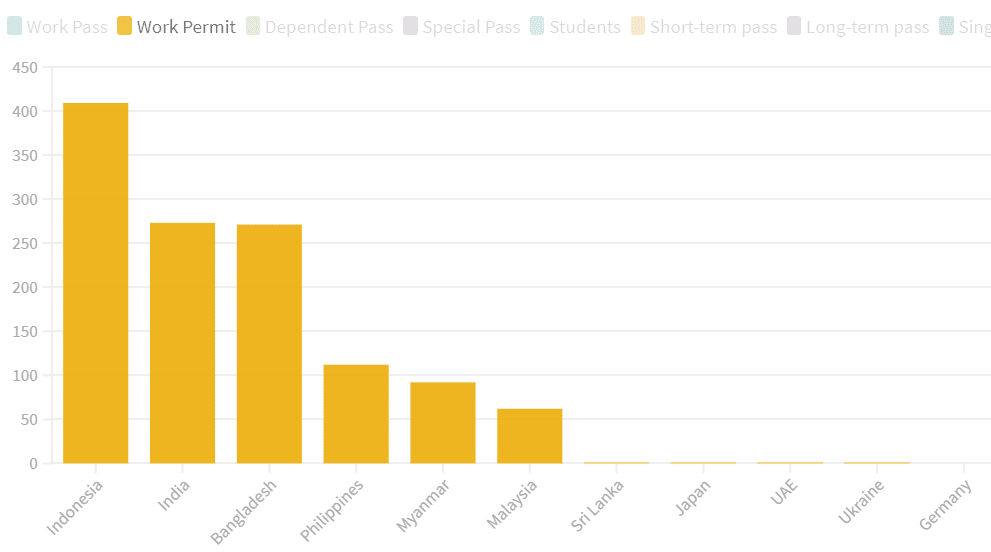 Arrivals from India seem to dominate other categories

Singapore had about 323 infected work pass holders reported between 1 January to 11 June this year. Among these cases, 117 of them came from India, 45 cases came from Nepal, and 42 from the UAE.

Similarly, out of 216 dependant pass holders during that period, 85 of them were from India, 46 from Nepal, and 33 from the UAE.

Out of 211 short-term visitors reported from 1 January to 11 June, 80 of them travelled from India, and 47 came from Indonesia.

For just US$7.50 a month, sign up as a subscriber on The Online Citizen Asia (and enjoy ads-free experience on our site) to support our mission to transform TOC into an alternative mainstream press.
Tags: COVID-19IndiaIndonesia