by The Online Citizen
in Comments
Reading Time: 4 mins read
2

Beijing has stated on Monday (15 March) that it is “very concerned” for the safety of its people in Myanmar after Chinese factories were attacked amid a bloody crackdown on pro-democracy in Yangon.

According to Chinese state media, 32 factories in Myanmar’s commercial heart of Yangon were attacked on Sunday (14 March), resulting in $37 million (S$49.7 million) in damage and leaving two employees injured as security forces launched a bloody crackdown on protesters which left dozens dead.

AFP reported that the Chinese Embassy in Yangon has accused protesters of attacking the factories. Martial law has also been declared in the townships where the factories were located.

Describing the incident as “nasty”, foreign ministry spokesman Zhao Lijian urged Myanmar to take actions to “resolutely avoid a recurrence of such incidents”.

China “is very concerned about the impact on the safety of Chinese institutions and personnel… the actions of these outlaws are not in the interests of Myanmar and its people”, he said.

Zhao said Myanmar security forces had reinforced the area around the factories.

“China will continue to urge Myanmar to take concrete steps to stop all acts of violence and bring the perpetrators to justice and ensure the safety of Chinese people’s life and property,” he told reporters in Beijing.

Many in Myanmar’s pro-democracy movement believe China has sided with the army since a February 1 coup took out the civilian government led by Aung San Suu Kyi.

China is a key investor in Myanmar and has bet big on its strategic importance to its Belt and Road Initiative, a sweeping infrastructure project.

Over on social media, Myanmar nationals dismissed the claim made by the Chinese Embassy in the country. Commenting in the Facebook post of Channel NewsAsia, they said that the fire at the factories was set by the police and military, and not the protesters. Netizens also pointed out that the media outlet should not “spread fake news” and they should check the ground to find out first what is happening before reporting. A number of them said that they only heard that two or three factories were burnt down by the military, and not 32 as per reported by the Chinese state media.

Many of them expressed that the protesters are trying to survive the violence of the police and do not have the time to set the factories on fire. They said that the junta is doing this and blaming and destroying the image of peaceful protesting in the country. 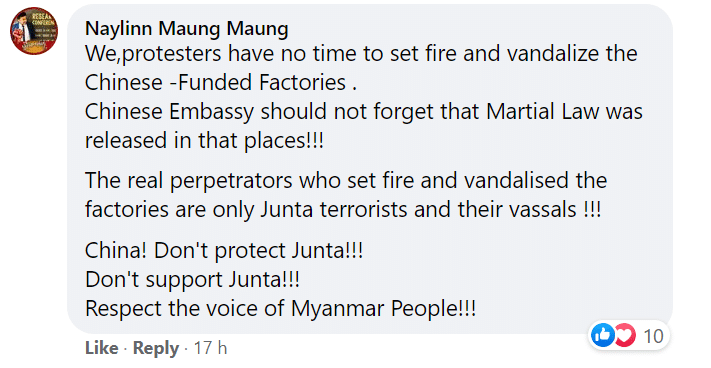 One online user urged the Chinese embassy to “open (its) eyes and voice up that the military are killing” innocent citizens and raiding their houses. “Please don’t blame to the peaceful protesters anyhow, do investigation the fact and stop the root cause of problems those all are done by the terrorist Military,” the user wrote. Some slammed China for interfering in Myanmar’s internal affairs, adding that the Chinese embassy should leave the country. They also stated that China has never been a good neighbour to Myanmar, and that they hate China.