by The Online Citizen
in Comments
Reading Time: 7 mins read
38

A female Singaporean pastor found herself in hot water after asking women to dress up in a less “revealing and provocative way” in order to help men to not have “lustful thoughts”.

Pastor Joanne Chow of Pasir Panjang Hill Brethren Church shared her thoughts in a post titled “In the fight against sexual temptation, defence is not enough”, which was published on Christian site Thir.st’s Instagram page on Sunday (21 February).

Her post mainly discussed ways unmarried couples can combat sexual temptation, which include keeping a distance from anything that may entice them to participate in sexual conduct and sharing their struggles with a trusted individual, as well as to turn to God.

However, she also asked girls to dress modestly in her post, which did not go down too well with netizens.

“Can I also make a special appeal to the girls? Let’s help our brothers by not dressing in a revealing or provocative way.”

“Of course you don’t have control over their lustful thoughts, and it may not be a sin to wear that skintight dress or post that bikini photo, but if we can help our brothers, why not? Avoid it not because we must do it, but because we love each other as brothers and sisters in Christ,” she wrote.

Her essay came after popular Christian apologist Ravi Zacharias was accused of committing sexual abuse, in addition to facing allegations of rape.

The accusations came to public knowledge only after his passing in May last year.

After the post went up on Instagram, netizens were quick to slam the pastor for her remarks.

They said that this is “victim-blaming” and that women’s clothing should not be scapegoated over sexual harassment. 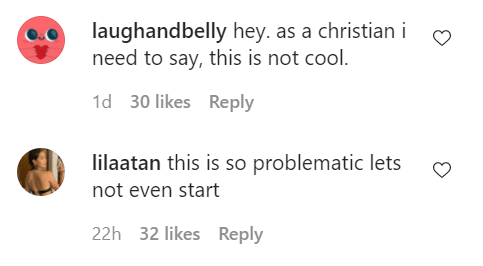 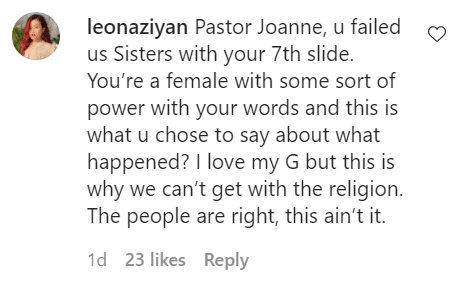 Some even shared their personal experience where sexual advances were made against them even though they were not dressed provocatively or in a revealing manner. 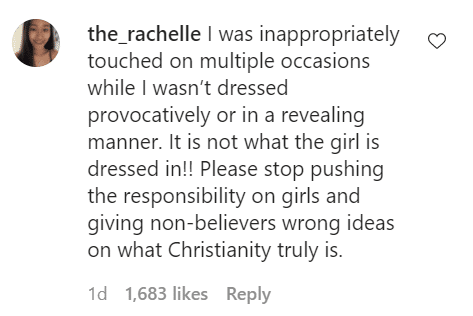 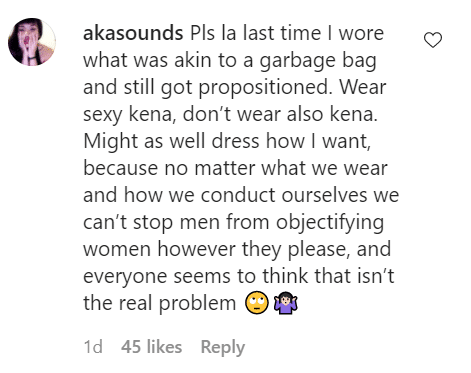 Others said that it is worrying for a young pastor to have such a dated mindset and that the onus is not on women to stop men from committing sexual crimes. 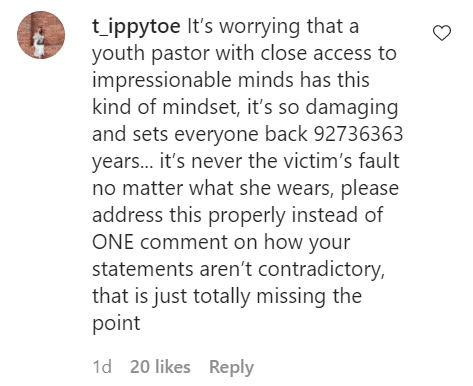 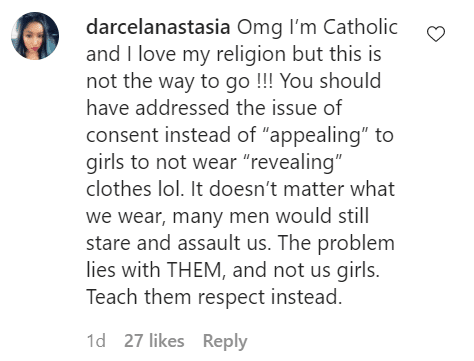 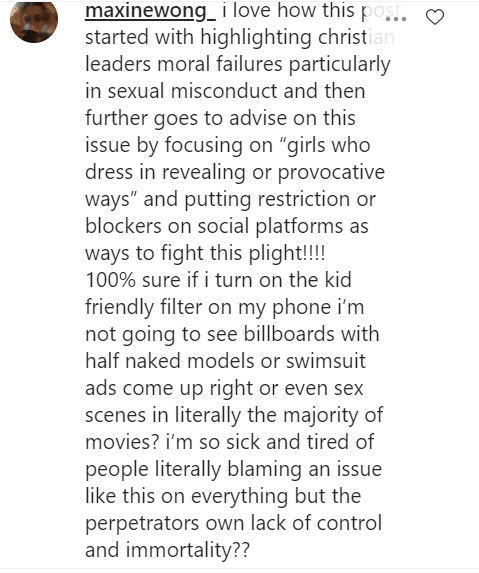 Following the backlash, Thir.st updated their caption by stating that the same principle applies to men as well.

“As a female pastor writing to females in this article, Pastor Joanne made a special appeal to the girls on the issue of dressing. However, the same principle of not stumbling one another applies to the guys as well.

“We would also like to clarify that this point should not be taken to mean that it is the women’s dressing that is at fault in cases of sexual harassment or assault. We have always denounced such acts of violence and have said that perpetrators must bear responsibility for their offences,” the page explained.

The page also added a comment in the post with a similar clarification a day later on 22 Feb.

It noted that the post is a follow-up to articles addressing Zacharias’ alleged sexual misconduct and felt a need to offer “practical advice on how Christian can avoid falling into sexual temptation”.

“It would be simplistic to say that the issue of lust can be solved by modest dressing. That is not what the article is claiming. And yet it is also true that a revealing outfit worn by a girl makes it harder for a guy not to be sexually tempted,” it stated.

Thank you for your comments on this post. We’ve heard your concerns and would also like to clarify the intention behind this article.⠀

When news of Ravi Zacharias’ sexual misconduct broke, we published several articles that addressed the need for repentance of sin, accountability and ministry to victims who have been abused.⠀

As a follow-up to those articles, we felt there was a need to offer practical advice on how Christians can avoid falling into sexual temptation. ⠀

The underlying premise of this series – How Not To Fall – is that men and women alike face temptations, and we all have a personal responsibility to guard against sin.⠀

Sharing from her perspective as a female youth pastor, Pastor Joanne talked about taking steps to protect ourselves, partner with others and pursue God. It was under the 2nd point where she mentioned how we can help one another within our Christian community.⠀

She acknowledged that everyone is ultimately responsible for their own thought life. However, she also suggested that girls could help the guys by dressing modestly. Both statements can be true at the same time and are not necessarily in conflict.

It would be simplistic to say that the issue of lust can be solved by modest dressing. That is not what the article is claiming. And yet it is also true that a revealing outfit worn by girl makes it harder for a guy not to be sexually tempted.⠀

While the article didn’t go into specifics of how a guy could stumble a girl with his dressing (this could be explored in another article as modest dressing wasn’t the main focus of this article), we acknowledge that there are certainly instances where this could happen as well. ⠀

It would be inaccurate to say that this post seeks to blame women for the sexual sin of men, or worse – that victims of sexual assault deserve it. This is not what we stand for nor what the writer intended.⠀

To have such a stance would also be inconsistent with other articles we have published that call on men to treat women with respect, not to objectify women and to exercise self-control. In fact, we have a few more articles lined up that would address some of these points. ⠀

We encourage you to look out for them.

Pastor apologises, says does not “advocate victim-blaming in any way”

On 23 Feb, the pastor apologised for hurting anyone, especially victims of sexual abuse, over her comment of asking girls to dress modestly, adding that she does not advocate victim-blaming.

“To be clear, I do not advocate victim-blaming in any way. In any sex crime, the victim’s attire is irrelevant. Women are not responsible for men’s actions. I made the point about dressing modestly purely as an appeal for consideration, with the best of intentions,” she wrote in the comment section of the post.

She added that both men and women play a part in preventing sexual temptation and that she could have “framed and phrased” her message better.

Read her full apology below:

Hi everyone, I realise that my comment on dressing modestly has sparked many responses and comments, and even angered many people. I’m truly sorry if it has hurt anyone, especially victims of sexual abuse. I understand how it ended up coming across as insensitive and that it caused offence to some in light of the recent revelations around Ravi Zacharias.

I hope you will allow me to clarify my position. To be clear, I do not advocate victim blaming in any way. In any sex crime, the victim’s attire is irrelevant. Women are not responsible for men’s actions. I made the point about dressing modestly purely as an appeal for consideration, with the best of intentions.

While the Ravi Z revelations caused me to start thinking about this issue again, my article was actually not about addressing sexual predation or how to avoid it. Rather, I hoped to encourage the Christian community to help each other avoid sexual temptation.⠀

In this area, both men and women play a part. As a woman, I wrote the article to speak to other females who want to take sexual temptation, and their part in the church seriously.⠀

There is greater clarity on hindsight as to how a message or thought could have been better framed or phrased; I accept that. It was not my intention at all to insinuate victim blaming or excuse predatory behaviour and I apologise if it came across that way.⠀