Pet dog’s paw caught in the escalator at VivoCity, finally freed after crying for half an hour

A tragic incident occurred at VivoCity Mall on Saturday (15 Aug) where a pet dog’s paw got caught in the gaps of an escalator.

A female witness at the scene – who prefers to be called Ms Ke – told Lianhe Wanbao that she was there at the mall with her pet dog for grooming, and she saw this tragedy happening on the third floor of the mall at 10am.

According to the photo Ms Ke provided, the poor pet dog whose paw was stuck in the escalator was believed to be a King Charles Spaniel. 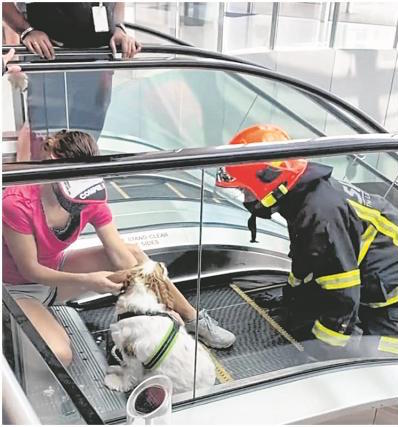 Ms Ke recalled that the owner of the Spaniel – who is about in his 40s – held one dog in his arm and another one on a leash.

“He carried one dog in his arm, and the other dog was sitting on the escalator step,” she said.

“As I looked carefully, it turns out that the dog’s hind paw was caught in the escalator. Perhaps it was its fur or its claw that was stuck, and the escalator stopped moving when its paw was sucked into the machine.”

The 33-year-old woman said that the Spaniel was bleeding on the spot, adding that it was crying due to the pain. The mall’s management team arrived at the scene to provide support while passers-by called the Singapore Civil Defence Force (SCDF) for help.

A female mall staff told the press that the mall’s technician came to the rescue by taking the escalator apart, and the Spaniel was finally freed after being stuck for half an hour.

Ms Ke mentioned that a dog’s fur or nail can be easily stuck in the gaps of an escalator. Hence, she advised pet owners to hold their pets in their arms when riding the escalator.

“A dog’s fur or nail can be stuck in the escalator easily, I always choose to take the elevator when I bring my pet dog to the mall. Only when I didn’t have a choice, I would carry my dog. That (Spaniel) owner should have been more careful about it.”