Newly elected Sengkang GRC MP Jamus Lim from the Worker’s Party was featured in a video on Tatler Singapore’s Facebook page on Sunday (9 August) in which he shows people around the neighbourhood of Anchorvale in North East Singapore.

Throughout the three and a half minute video, Mr Lim extols the wonders of Anchorvale and Sengkang in general and debunked the “misconception” that it is a “bland neighbourhood” as he points to different spots such as the community  garden and the 24-hour vending machine café. He also playfully pointed out that the cafe was opened by “one of the competition” Minister Tharman Shanmugaratnam, before purchasing nasi lemak, fresh orange juice and a 100 Plus from various vending machines in the cafe.

Introducing the Sengkang Riverside Park, he said, “The name Sengkang refer to the first, kind of, port of call along Sungei Punggol with Hougang being the latter port, the back port of the area,” adding that many Sengkang residents have been there for generations.

He also highlighted the largest man-made wetlands in Singapore located in the park.

Being next to a river, Mr Jamus also highlighted the Community Club in Anchorvale which has facilities for water sports which is “unusual for CCs in general”.

While enjoying a plate of the famous Armenian Street Char Kway Teow, Mr Lim also noted, “Well, obviously Char Kway Teow is characterised a lot by the presence of certain kinds of shellfish. I’ve been banned from using a particular phrase in my expressions.”

This is a cheeky reference to his use of the phrase “warm the cockles in my heart” during the GE2020 debate in response to comments about social mobility and education and during his thank you speech after winning the MP seat.

All in all, the only hint of politics in the video is that line from Mr Lim as referred to People’s Action Party (PSP)’s Mr Shanmugaratnam as “one of the competition.”

There were a few netizens in the comments who thanked Mr Lim for introducing Anchorvale to the public while also expressing appreciation to Dr Lam for transforming Sengkang West.

A couple of netizens described the video as being an “innovative” way to introduce the area to residents, and noting that they found it “enlightening”.

When someone blamed Mr Lim of “taking credit” for Sengkang’s development, There was one person who pointed out that the politician never took credit but was nearly giving viewers a tour of the town. Another person noted that the video was devoid of political reference altogether. 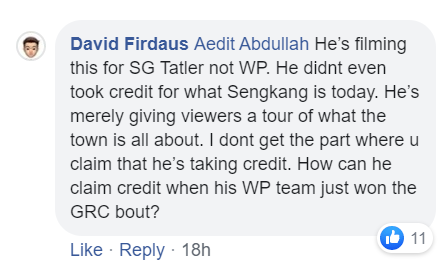 Biden polls higher in first week than Trump at any time