Netizens echo concern of droplets and aerosols dispersion during exercise

Minister for National Development Lawrence Wong on Tuesday (14 April) announced that it is now mandatory for everyone to wear a face mask when leaving their house while the children below the age of two and those who are engaging in strenuous exercises such as running and jogging will be exempted for this rule.
However, these exemptions have gained concerns and negative remarks from the netizens as many of them opined that those groups are also being exposed to the risk of transmission of coronavirus.
Shortly after the announcement, Dr Billy Tan, who is an ophthalmologist of Gleneagles Medical Centre and Mount Elizabeth Novena Hospital, took to his Facebook page on Tuesday (14 Apr) urging government should have “no exceptions” to impose “masked when outdoors rule” to everyone.
Dr Tan said the mandatory exempted runners and joggers “begs logic” as it had been shown that the groups will disperse a much wider area of droplets and aerosol.
Noting that there is possibility where a runner or jogger to be a healthy asymtomatic spreader, he cautioned that the virus that they leave could be far wider than anyone else who wearing a mask.
While government asking everyone to stay at home in the midst of circuit breaker measure, he said it is really “no sense” when there is “obsession” on allowing people to exercise outdoors during this period.
“Its like saying all those who drive must follow traffic rules, but those who drive above speed limit do not need to, but once they slow down to the speed limit – they then must follow traffic rules,” he added.
Dr Tan stressed, “Priority is to stop spread of droplets n[and] aerosol by everyone.”
He reiterated that the country and the people will be suffered if there are loopholes in government’s effort against the COVID-19 pandemic.
“Let’s please not spare a few and risk the rest who are complying. There is really no valid reason to do that,” he added.

Meanwhile, commenting under the post of Dr Tan as well as Facebook page of CNA, TODAY and The Straits Times, many netizens agreed that joggers and runners will disperse more air droplets and aerosols when they heavily breathing during exercise and subsequently the risk of spreading the virus or being infected will be more higher.
As such, the netizens encouraged the people exercise at home while urging government to ban all the outdoor activities or apply mask-wearing to those who doing outdoor exercise. 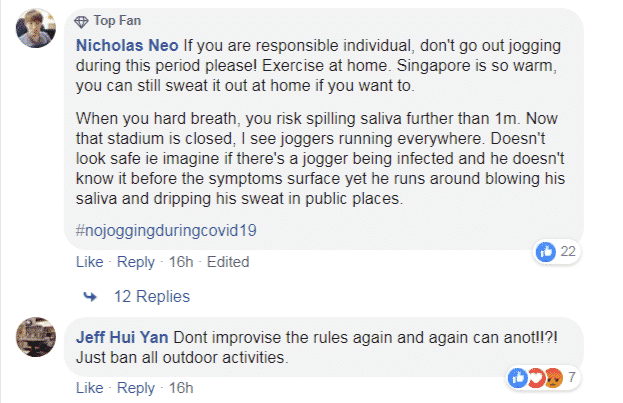 Some netizens slammed government over their improper thought for allowing people to exercise outdoor during this period of time as everyone fight so hard to strengthen defence against COVID-19. Instead of changing the rules everytime, the netizens said that government should keep the rules simple and not leaving exception to any others people.

A few netizen also pointed out the loopholes of the people not wearing mask might giving excuse when they caught by enforcement officers.

To make no exemptions for mask-wearing, some netizens explained that people will take advantage or excuse on this exemptions to hang around or flout the stay home rule given that there are increasing numbers of people exercising outdoor before the circuit-breaker period.

However, a few netizens have a difference viewpoint of wearing a mask during exercise. They opined that wearing a “thick recyclable mask” will cause them to breath barely and to look like “an intern aspiring to be a circus clown” when doing a workout.