NUS Prof voices support on MOE’s decision to suspend Zoom for HBL; Some go on to criticise and suggest better solutions

Associate Professor at the National University of Singapore, Ben Leong published a lengthy note on Facebook on 11 April in support of the Ministry of Education (MOE)’s decision to suspend the use of Zoom in home-based learning, adding that teachers have been given a comprehensive list of guidelines to conduct the online classes.
Recently on 10 April, the MOE announced that schools will suspend the use of the video conferencing application Zoom for home-based learning after an online class was hijacked and students were shown pornographic content by two Caucasian hackers.
Following that, Assoc Prof Leong – who worked with the MOE for five years until 30 June 2009 – posted a note on Facebook on 11 April claiming that he became the “complaint central” for the MOE as irate teachers and parents wrote to him to complain about the matter.
In his Facebook note, he explained how the Zoom works and seems to express zero concern about the application’s security.
“Everything else that people can steal, Facebook has probably already stolen. Students how? Well, when they login, they just need a link. They can call themselves “Mickey Mouse” or “Donald Trump” and I wouldn’t know better. What can I do? All I can do is boot them from the class if they don’t comply with my instructions to use a “real name,” so I doubt there’s much to leak,” said Assoc Prof Leong.
He further asserted, “As a teacher, do I have any concerns about Zoom security? No.”
Commenting on the MOE’s announcement to suspend Zoom for home-based learning, he understood why it has caused panic among the teachers as they spent great effort in learning about the application.
“At this point, you would conclude like me (then) that MOE doesn’t know what it’s doing and over-reacted. This is a common view of the teachers on the ground who understand how to use the tool. The angst is that one teacher messes up, MOE over-reacts and the other 37,999 suffer,” he remarked.
Noting that his former colleagues are not at liberty to publicly discuss the matter, he explained the situation on their behalf and compared the home-based learning with the Singapore Armed Forces (SAF)’s Training and Safety Regulations (TSR).
“SAF has this thing called TSR (Training and Safety Regulations). Everyone must take the test,” he said. “Still people get heat stroke and die. Actually dun have to ask, 99% is non-compliance of lawful order. But if someone dies, SAF still must suspend training and investigate what (even if it’s patently obviously it’s because someone did something they should not that is already covered by some rule in the TSR).”
According to Assoc Prof Leong, teachers have been given a comprehensive list of guidelines to conduct the home-based learning and the Zoom sessions were already being set up by default but the teacher probably had used personal device instead of using the Schools Standard ICT Operating Environment (SSOE) device provided by the MOE.
“Teachers have already been issued this comprehensive list of guidelines, which sadly, TL;DR people don’t read or missed some parts. If the teachers use the MOE-issued SSOE laptops, I was told that the Zoom sessions already locked down by default (probably explains why investigation had to be done. Likely teacher was using his/her personal device),” he added.
He urged teachers to be kind to the MOE headquarters as they worked overtime on a public holiday to wrap up the investigation and to circulate an advisory the next day so the home-based learning can still proceed on Monday.
“HQ sometimes might fall short, but in this particular instance, people have all tried to do their jobs as best as they can — and as far as I can tell, they cannot be faulted. If MOE did nothing after the incident was reported, you can also imagine the kind of flak that MOE would receive,” Assoc Prof Leong noted.
Nevertheless, he opined that the teacher should not be punished for non-compliance of a lawful order as the teacher could be struggling to cope with technology and traumatized by the incident. He then shared the challenges he faced when teaching online in the past six years.
Assoc Prof Leong concluded the note by urging people to be more patient during this period of time as the MOE and teachers are working hard to provide good education to the children amid the imposition of the “circuit breaker” measures.

Some netizens criticized the MOE’s decision to change the system

Although many netizens agreed with Assoc Prof Leong’s points of view and praised him for explaining the context of home-based learning, some netizens criticized the MOE’s decision to change the teaching system.
One netizen voiced his concern about the schools using platforms such as Google Classroom, Class Dojo, Zoom and others, as many parents are not savvy enough in using technology and teachers had to rush for last-minute instructions. He also questioned if the system is sustainable.

Another netizen, however, pointed out that there were no clear guidelines given to the teachers and noted that home-based learning is not like TSR at all. The netizen also suggested that the MOE should work with Google and Zoom to enhance their features and security.

A netizen pointed out the uses of other devices such as webcam and laptop to replicate classroom teaching, so the teacher gets to see the students virtually. The netizen also indicated the suspension of Zoom was the MOE’s move to show the public how serious they would take such issues.

Meanwhile, a netizen who happens to be a teacher until July 2019 also commented that it was not the teachers’ fault for being unable to transit to home-based learning in short notice. She also noted the MOE encouraged students to be “future-ready” but the HQ itself failed to foresee the problems with home-based learning. 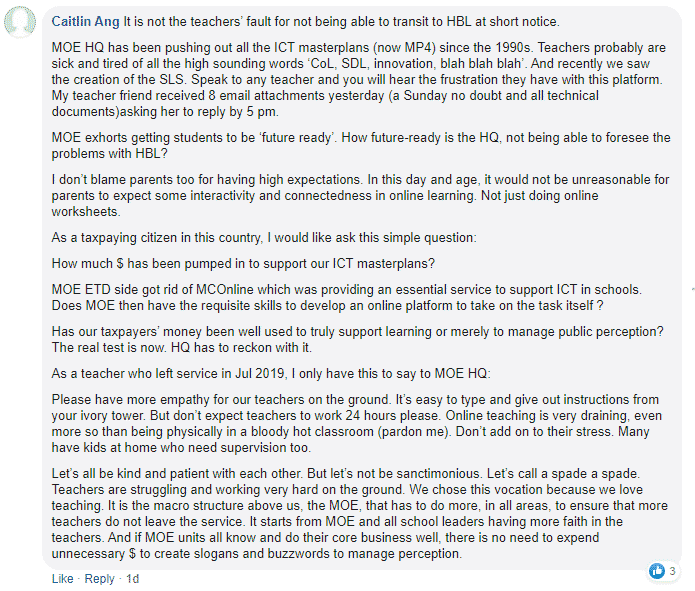 One netizen pointed out that the preparation work for home-based learning can take three times the amount of workload, and preparing for a Zoom lesson is difficult as teachers need to ensure the materials are being saved in a convenient yet secure place for the students to download.
He also suggest the use of Discord which is much advanced than Zoom, with more features that is beneficial to the teachers conducting lessons. 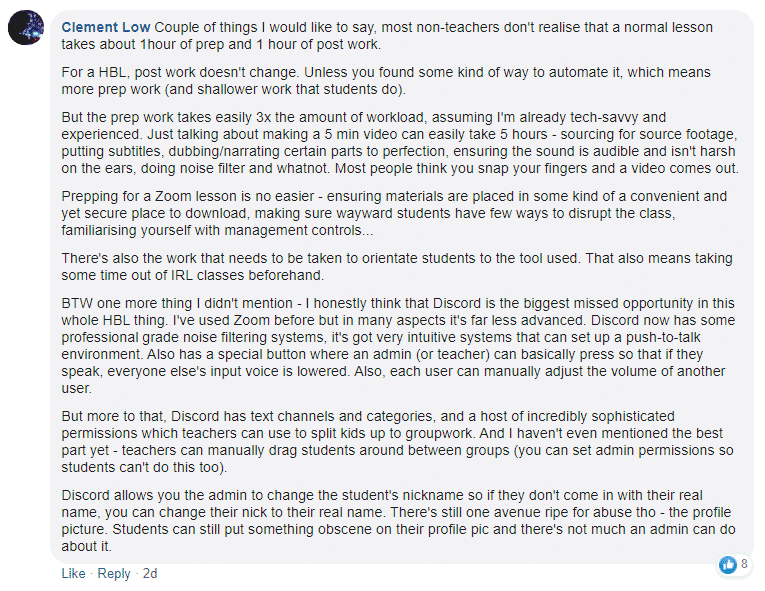 Countries that license bicycles do it for reasons such as insurance and anti-theft, not lack of road safety compliance