The head of Temasek Holdings Singapore investment company, Ho Ching shared on Facebook yesterday (5 March) a photo of a public notice in foreign country indicating that the store has run out of toilet paper and will be restocked by “3/01/25020”, the post was purported to be a “funny post” and some netizens sarcastically commented that hoarding toilet paper is “xia suay”.

The photo showed a public notice that was put up by Costco store to inform its customers that toilet papers are out of stock and will be restocked by “3/01/25020”. Costco also apologized for the inconvenience. 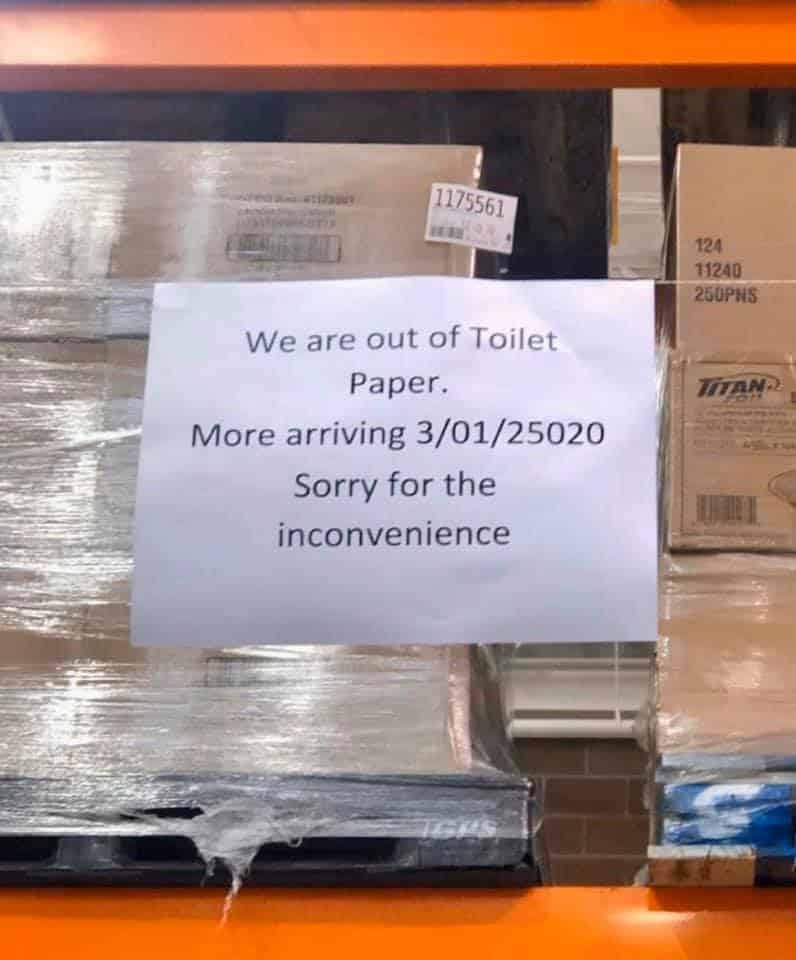 It was initially posted by an online user from a foreign country, Jessica McCollum, who wrote “Now look what y’all have done! Costco is out of toilet paper for the next 23,000 years.”

Although she did not specifically mention which Costco store has put up the public notice, apparently the threat of COVID-19 virus has sparked a wave of panic buying in other countries – especially in Australia – resulting in items including toilet paper to be out of stock across the country.

On the other hand, Madam Ho Ching – who is also the spouse of the Singapore’s Prime Minister Lee Hsien Loong – shared the user’s post and simply just captioned it with laughter.

While some netizens seemed to be amused with the post, other commenters sarcastically indicated that those who hoarded the toilet papers were “idiots” and “xia suay”.

Ironically, the “xia suay” comments seem relatable to the Trade and Industry Minister Chan Chun Sing’s remark on the behavior of some Singaporeans who stockpiled essential items over the fears of the virus outbreak as “xia suay” or “disgraceful”.

“We embarrass ourselves, disgraceful, we disgrace ourselves,” Mr Chan said during his meeting with a group of local business leaders organized by the Singapore Chinese Chamber of Commerce and Industry (SCCCI) last February.

Mr Chan noted his incredulity of Singaporeans panic buying not only food but also things like toilet paper and claimed that people were doing that here because they’ve seen that people in Hong Kong were also stockpiling toilet paper.

He lamented, “No paper, water also can. So why do we behave so idiotically?”

Meanwhile, on 3 March, Daily Mail reported about the situation in Australia which showed Costco shoppers have been stockpiling huge packs of toilet paper and some even took as many as 200 rolls of toilet paper amid fears of the spread of the COVID-19 virus.

Daily Mail highlighted that the panic buying came after Australia’s Chief Medical Adviser warned on 24 February that the nation’s strategy no longer includes trying to stop the spread of the virus.

“Pasta, tinned food, bottled water, toilet paper, and hand sanitizer have been the most in-demand items at supermarkets across the nation – and plenty of stores aren’t able to keep up with demand,” Daily Mail reported.

This also happens in the United States (US). On 4 March, Metro reported that shoppers in the US have begun to hoard items amid the COVID-19 virus outbreak, a shopper in Massachusetts US photographed a shop there and said that toilet paper stocks were running low while ‘all the bleach was gone too’.