The government has been slow to deploy necessary measures to protect the health of the people from the COVID-19 virus as it took 10 days to implement entry restrictions for visitors who traveled to South Korea, said the People’s Voice Party (PVP) founding chief Lim Tean on his Facebook page yesterday (3 March).

Earlier on 23 February, the PVP chief wrote on his Facebook page, demanding that travelers from South Korea should be denied entry into Singapore as the country raised its alert level to the highest amid the coronavirus outbreaks in Daegu city and Cheongdo county.

However, the Ministry of Health (MOH) released a statement on the same day, only advising people to avoid non-essential travels to Daegu and Cheongdo.

Mr Lim opined that it is manifestly inadequate and reiterated that the government should impose an immediate entry ban on all visitors from South Korea until the crisis passes.

PVP renewed the demand two days later (25 February) as other countries such as Israel and Hong Kong have already started to ban travelers from South Korea from entering their territories.

“The PAP government, in the typical reactive posture they have adopted throughout this crisis, is still allowing South Koreans to enter our Country,” Mr Lim said, adding that PVP is never a party that is content to be a bystander.

Meanwhile, Singapore only started to ban travelers returning from South Korea, Iran, and northern Italy yesterday, in which travelers who showed signs of fever or other symptoms of respiratory illness will be required to undergo a COVID-19 swab test at the checkpoint, The Straits Times reported.

Prior to that, the PVP chief indicated that the People’s Action Party (PAP)’s procrastination throughout the crisis was “pathetic at best and dangerous at worst” on his Facebook post yesterday.

“This incident again highlights how reactive this government is! It is always 7-10 days behind the curve in implementing necessary measures to protect the health of our People from the virus,” the PVP chief stated. 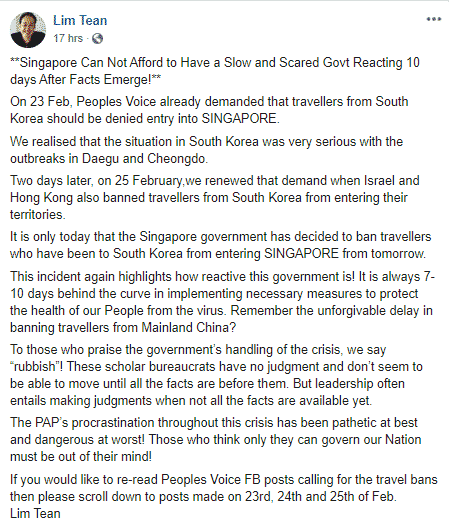 He further cited the government’s “unforgivable delay” in banning travelers from Mainland China – which only kicked in on 2 February onwards.

Mr Lim asserted that the people who believe that only PAP can govern the nation must be “out of their mind” and that those who praise the government’s handling of the crisis are “rubbish” as scholar-bureaucrats only seem to react when the facts emerged.

“These scholar-bureaucrats have no judgment and don’t seem to be able to move until all the facts are before them,” he cited. “But leadership often entails making judgments when not all the facts are available yet.”