Shoppers and customers were left in darkness following a power shortage at the Raffles City building in Cityhall, on Monday evening (13 Jan).

Raffles City wrote on its Facebook on Monday (13 Jan) that the mall was alerted to partial power shortage at 8pm.

“We are working to resume the affected power supply soonest possible. We will continue to post updates here and we apologise for any inconvenience caused. Thank you for your understanding,” Raffles City said.

In an update later on, the mall informed the shopper that the power has restored progressively from about 9.30pm and the mall will be closed for the day while working to restore the power supply in full.

It also said that the normal operations will resume on the next day.

“Our network is in order. We have reached out to Raffles City to offer assistance,” SP Group said.

#ADVISORY: We understand that there was an electricity supply interruption at parts of #RafflesCitySingapore. Our network is in order. We have reached out to Raffles City to offer assistance.

Apart from that, PhillipCapital also encountered issue of server down due to the power shortage in Raffles City.

“Please note that we are experiencing technical difficulties. Our IT Engineers are looking to get service back up. Sorry for any inconvenience,” it said in a POEMS SG 2.0 mobile notification.

Customers who were left in the darkness have also shared the photos and videos of the situation on social media.

Alexis Cheong said in her twitter post that the automated teller machine (ATM) and escalators in the mall were out of service while the Chinese New Year music still going on and playing. She uploaded a video clip of the blackout as well.

Some of the netizens, who were affected by the blackout also commented under Raffles City’s post.

Andrea Mei who was one of the affected diners, demanded compensation from the mall for the reason that she was forced to leave while her family was halfway through their dinner and this has caused her inconvenience.

Muthu Suresh Mike also mentioned that there is no any announcement when the blackout happened in the mall and he waited in hot and dark for 15 minutes before leaving. 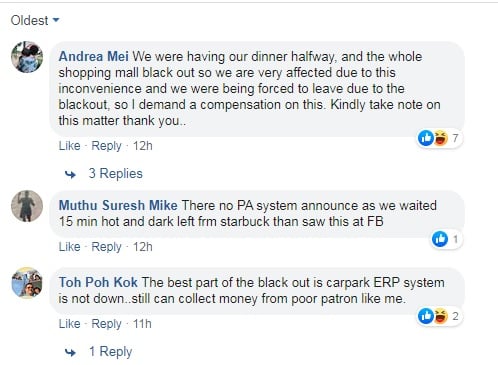 As reported by Straits Time, the lights in the mall began to return at about 10.10pm.