PAP Supporter: It is the parents and not MOE who inflicted shame on child

In the recent saga of Ministry of Education (MOE) hitting back at social activist Gilbert Goh for highlighting the plight of a PSLE student not receiving her original PSLE result slip due to outstanding unpaid school fees, a member of the public by the name of Priscilla Poh Beng Hoon has written to ST Forum today (3 Dec) in support of MOE (‘Forum: My parents skimped to pay my school fees‘).
“I hope the Ministry of Education (MOE) sticks to its longstanding practice to withhold original Primary School Leaving Examination results slips due to unpaid school fees in spite of the outcry from netizens and political activists capitalising on the situation,” Ms Poh said.
“In fact, MOE was gracious to have given the photocopy of the results slip to the child.”
She then blamed the parents instead of MOE for shaming the child, “Let it be clear that it is the parents, who knew that school fees have to be paid, who inflicted shame on the child, and not MOE.”
“I believe MOE would have given enough leeway to the parents to pay the arrears but, for whatever reason, the parents did not,” she surmised.
She then went on to speak on behalf of MOE, saying that the ministry has placed great importance in ensuring every child receives mandatory, heavily subsidised education and that there are also social outreach programmes that families can tap such as The Straits Times School Pocket Money Fund.
Accusing people of having a sense of entitlement, she said, “My poor parents skimped on basic essentials to pay my school fees, school bus fares and textbooks.” And added, “Growing up, it was our own responsibility and determination to get schooled. We did not have any sense of entitlement.”
Ms Poh: I shouldn’t use my precious vote to play ‘checks and balances’ with a govt that gives stability, security and peace
It turns out that Ms Poh is a regular contributor to ST Forum and a known PAP supporter, who often writes letters to ST in support of the government.
For example, right after PAP won by landslide in 2015 GE, she wrote to ST snubbing the opposition and praising the ruling government (‘Voters, PAP must keep the faith‘).
She wrote, “Throughout the hustings, there were no security and economy strategies being proposed by the various opposition parties. Instead, there were the same rowdy choruses echoed about elderly garbage collectors or cleaners.”
“I agree with the PAP’s Ms Denise Phua’s suggestions that the opposition should seek these elderly out and help them,” she said.
“There were also candidates whose main platform was speaking up on issues that the Government was already addressing. In the end, I was convinced that I should not use my precious vote to play ‘checks and balances’ with a government that had given me stability, security and peace over the past 50 years.”
She praised the PAP government that in the past 50 years, it has done well in helping Singaporeans cope with the “uncertainties and fluctuations of the shaky world economy”. She said the government should have the ability to weather them again.
“I am glad that I did my due diligence and spent my one vote wisely. It has translated into ‘precious political capital’ that Prime Minister Lee Hsien Loong has assured us that he and his team will make good use of.”
Ms Poh accused of racism by Malay MP
Sometime towards the end of 2015, an incident happened involving Ms Poh. At the time, a Malaysian media, the Malay Mail, reported that a Malaysian minister had called for Malay to be used as the language of communication in ASEAN. Upon reading the news, Ms Poh apparently went into a rage and made a controversial post on her Facebook page: 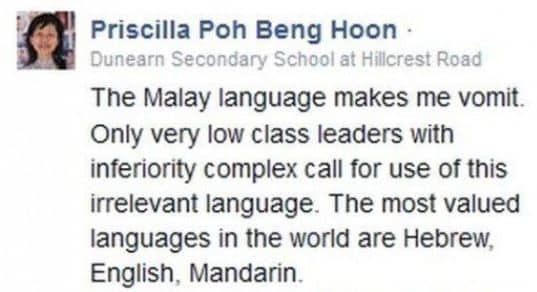 She wrote, “The Malay language makes me vomit. Only very low class leaders with inferiority complex call for use of this irrelevant language. The most valued languages in the world are Hebrew, English, Mandarin.”
Understandably, the Malay community in Singapore was not amused. It led to MP Zainal Sapari calling her out in his Facebook post (‘Racism should not be allowed to take root in Singapore: Zainal‘).
MP Zainal commented that racism is “beyond basic comprehension” and should not be allowed to take root in Singapore society. “It stems from a satanic mindset of one’s superiority over others,” he wrote.
“Unfortunately, racism cannot be eradicated,” said MP Zainal. “It is up to us to prepare our loved ones for what they will face, and, hopefully, we shall overcome.”

Many netizens also condemned Ms Poh online. But she disagreed with MP Zainal’s comments about her. In her follow-up posting, she claimed that the MP was making unfair comments about her. She justified that she was “well within her rights” to say what she said, and it was not right for the MP to label her a “satanic racist” when she did not mean to involve religious issues into the aforementioned matter. She ended off with accusing the MP of not knowing the full story, and just picked bits and pieces from everywhere to lambast her when she did not deserve.
For the matter, according to Wikipedia, the top 10 languages spoken by total number of speakers did include “Indonesian”. The top 2 languages are of course English and Mandarin. But certainly Hebrew, as quoted by Ms Poh, is not one of the top 10 languages spoken. 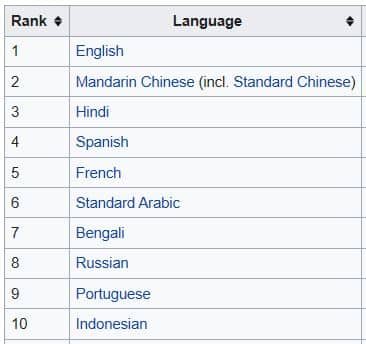 In any case, there is no reported news of the authorities taking any legal actions against Ms Poh for what she had said.