Singapore is the ‘smartest’ city in the world in 2019, according to the new and uniquely “citizen-focused” ranking of global urban areas, which reveals the necessity of aligning policy with the lives and needs of citizens.
Conducted by the IMD World Competitiveness Center’s Smart City Observatory in partnership with Singapore University of Technology and Design (SUTD) and Smart Nation Singapore, the IMD Smart City Index 2019 (SCI) ranked 102 cities worldwide, uniquely focused on how citizens perceive the scope and impact of efforts to make their cities ‘smart’, balancing “economic and technological aspects” with “humane dimensions”.
The top-10 smartest cities in 2019 are: Singapore (1st), Zurich (2nd), Oslo (3rd), Geneva (4th), Copenhagen (5th), Auckland (6th), Taipei City (7th), Helsinki (8th), Bilbao (9th) and Dusseldorf (10th).
Being a globally-recognized ‘smart’ city is now critical for attracting investment and talent, creating a potential ‘virtuous cycle’ in favour of an advanced group of cities – such as Singapore, Zurich, and Oslo.
“Smart cities are becoming magnets for investment, talent and trade. Yet, a significant part of the efforts and energy spent seem to be disconnected from the long-term aspirations of citizens. Without citizen’s support and engagement, smart cities may not be sustainable,” said Bruno Lanvin, President of the IMD’s Smart City Observatory at the IMD World Competitiveness Center. 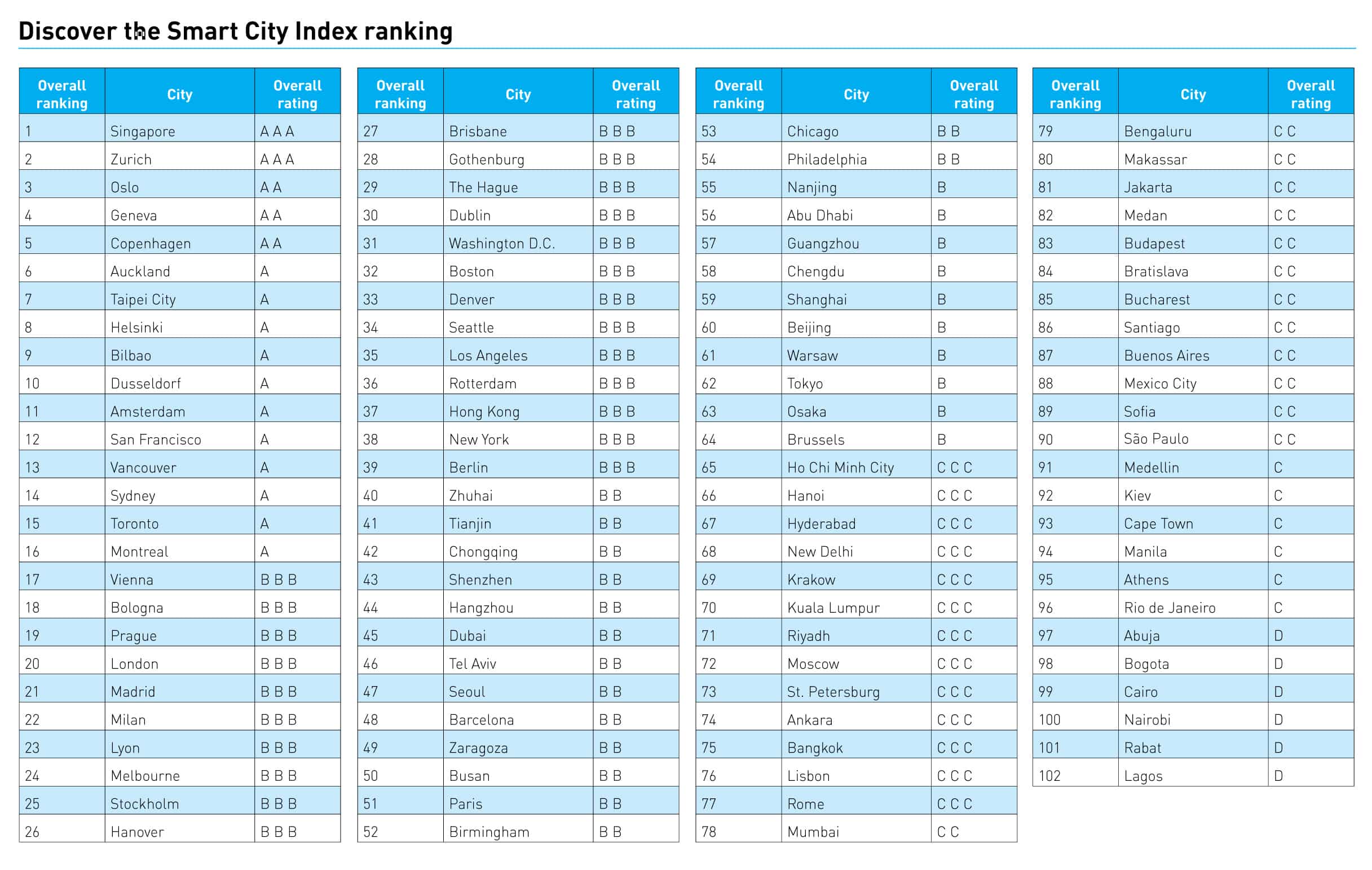 The index showed that there is no ‘one size fits all’ strategy to becoming a smart city; although all three leading cities score highly for ‘structures’ (how services are made available to citizens) while their scores vary for ‘technologies’ (which assesses real impact on citizens’ daily lives).
Singapore, for example, performs well in safety, monitoring of air quality and traffic congestion, while Zurich is strong for public transportation and access to medical and cultural services. As for Oslo, its citizens hail the quality of ‘circular economy’ solutions, online voting, and bicycle-centric mobility.
The index also revealed that economic performance of smart cities is deeply influenced by their context. For instance, large urban centres such as San Francisco (12th) or London (20th) make the top-20 of the IMD Smart Cities Index 2019. But, cities of smaller size, such as Bilbao (9th) – with populations below 500,000 – ranked remarkably high.
Additionally, it was noted that the concerns and aspirations of citizens vary widely depending on culture and socio-economic environments. SCI includes an assessment of attitudes towards the use of personal data, face recognition, and overall trust towards local authorities.
On that account, Chinese citizens – in Zhuhai (40th),Tianjin (41st), Chongqing (42nd), Shenzhen (43rd), and Hangzhou (44th) and those in Dubai (45th) seem to be more at ease than in other parts of the world, such as Chicago (53rd), Denver (33rd), Geneva (4th), New York (38th), and Paris (51st).
“The Asia-Pacific region has a special role to play in helping us identify the right strategies to build smart cities in a way that should be human-centric rather than technology-centric. The experience of Singapore is very different from that of Shenzhen or Jakarta, or even Melbourne,” stated Professor Chan Heng Chee, Chairman of the Lee Kuan Yew Centre for Innovative Cities at SUTD.
Moving on, it was noted that ‘smart cities’ are a fast-growing species, and fertile ground for new experiments in critical areas, ranging from urban planning, sustainable energy, and transport strategies to social integration and talent attraction. As leaders and citizens around the world assess, design, implement, and improve on ways to create better cities, they are confronted with a multitude of decisions and partial solutions to specific problems such as traffic congestion, waste management, and crime.
What’s more, quality of life (including environment, safety, access to health and education services, but also mobility and social interaction) seem to be more and more prominent aspirations for ‘smart cities’ worldwide.
Nonetheless, obstacles in the way of the growth of ‘smart cities’ include a gap between the priorities of municipal authorities and those of their citizens. Many technologies remain largely ignored by the populations they are claiming to serve. In many instances, advanced online services are theoretically available to citizens, but too cumbersome or insufficiently advertised to meet a critical mass of users. In most cases, such services seem to have been initiated in a ‘top-down’ manner, rather than being based on the priorities of citizens.
“Smart cities are growing and blossoming in all parts of the world. Economic realities cannot be ignored: cities in poorer countries face disadvantages, which will require specific actions to correct along the path towards smartness,” stated Professor Arturo Bris, Director of the IMD World Competitiveness Center.