Not about S. China Sea dispute anymore but working with China for ‘stable and inclusive region’

MINDEF announced yesterday (29 May) that China and Singapore have agreed to revise a defence pact so as to “deepen defence ties and step up bilateral engagements on various fronts” for both countries.

During a meeting between Defence Minister Ng Eng Hen and his Chinese counterpart General Wei Fenghe in Singapore yesterday, both welcomed the conduct of Exercise Cooperation involving both armies this year and agreed for Exercise Maritime Cooperation by both navies to be held next year.

Both Ministers have also agreed to revise the Agreement on Defence Exchanges and Security Cooperation (ADESC) between Singapore and China, which was first signed in 2008. The proposed exchanges included stepping up the establishment of frequent high-level dialogues, new arrangements for Services-to-Services cooperation, academic and think-tank exchanges, as well as an increase in the scale of existing bilateral exercises. The revised pact is expected to be signed later this year.

This is the first time General Wei as China’s defence minister visited Singapore. According to MINDEF’s press release, General Wei will be visiting Singapore’s Changi Naval Base and invited to go on board to review a Swedish-designed Archer-class submarine and a French-designed stealth frigate. Both belong to the RSN. 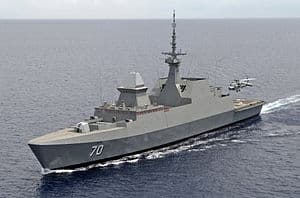 General Wei will also be meeting PM Lee and DPM Heng as part of his introductory visit. And Senior Minister Teo Chee Hean will host a dinner in honour of General Wei, said MINDEF.

When the media asked Minister Ng about the significance of the proposed revision to the pact, he replied, “If anything, it reflects bilateral confidence in each other, and the willingness to deepen defence ties, particularly because we have shared perspectives for a stable and inclusive region, especially for security matters.”

PM Lee put up strong front against China 3 years ago

It’s interesting to note that Minister Ng now talks about wanting to work with China for a “stable and inclusive region” when 3 years ago, PM Lee put up a strong front publicly against China. During the National Day Rally in 2016, PM Lee brought up the South China Sea issue saying it can “cause trouble”.

PM Lee then reminded Singaporeans that in 2013, the Philippines launched a case against China under The UN Convention on the Law of the Sea. He said, “China refused to participate, but the Tribunal heard the case, and issued its award in July (2016).”

“The award said that China’s claim to historic rights within the ‘nine-dash line’ is incompatible with UNCLOS. China rejected the tribunal’s jurisdiction and also categorically rejected the award as null and void,” he added.

“What is Singapore’s interest and stand? We do not have any claims of our own in the South China Sea… We have no claims of our own. We do not take sides on other claims. China, Philippines, the other claimants. But in other ways, we do have a lot at stake and three things matter to us, international law, freedom of navigation and a united ASEAN.”

Supporting the international tribunal’s judgement against China, PM Lee said that upholding international law and the peaceful settlement of disputes is a vital interest for a small country like Singapore.

“However, in reality, big powers do not always act like that. Big powers can insist on their own interests and often do. They do not submit to adjudication by international tribunals, they may not comply with their rulings and China is not the only country to do this,” he commented.

“Nevertheless, Singapore must support and strive for a rules-based international order. We have to depend on words and treaties. They mean everything to us. We cannot afford to have international relations work on the basis that might is right. If rules do not matter, then small countries like Singapore have no chance of survival.”

He also wants ASEAN to stay united so as to deal with the South China Sea issue. He said, “If ASEAN cannot deal with a major issue at its doorstep affecting its members, in the long run, nobody will take ASEAN seriously and that will be very bad for all of the members of ASEAN, and for Singapore, too.”

Continuing, PM Lee said that he understood any tension between Singapore and China may affect businesses and collaborations between private entities of 2 countries.

“But the Government has to take a national point of view, decide what is in Singapore’s overall interests. We want good relations with other countries if it is at all possible, but we must also be prepared for ups and downs from time to time,” he said.

In any case, ever since the SAF armored vehicles were returned back to Singapore by Hong Kong authorities, PM Lee’s government doesn’t talk about the South China Sea dispute publicly anymore. Instead, it now talks about working with China for a “stable and inclusive region”, which presumably also encompassed the South China Sea.