The recent revelation of a sexual misconduct incident involving two National University of Singapore (NUS) students has yielded varying public reactions across the board. Many have come out in support of the victim, Monica Baey, and are demanding for a harsher punishment to be meted out to the offender. Others are calling into question the disciplinary framework of the University while other’s still are debating the issue of how society has reacted over the incident.

One Singaporean chimed in on Facebook to say that the recent saga has taught her that the internet is a scary place to be in. And her stance on the issue has elicited its fair share of strong reactions as well.

In a lengthy post, Kethlyn Gayatiri Koh highlighted how within hours of Ms Baey coming forward with her story, members of the community at large leaped to her defence, demanding for harsher penalties and a revamp of NUS’s policies. She noted also that “many internet vigilantes began digging up similar incidents are occurred in NUS, and many also began naming and shaming Nicholas [the perpetrator], his girlfriend and their family”.

Ms Koh goes on to illustrate her point of this mob mentality point by point. She starts out by saying that “no one bothered to check the facts of the case” as presented by Monica before going on a social media rampage, equating this knee-jerk reaction to those of ‘aunties’ who forward messages in group chats. Though acknowledging that she doesn’t think Ms Baey’s story is fake, she asks what if it really was and how much damage that would have caused the accused and his family.

Before I go on, let me remind you that neither NUS or Nicholas has denied the story as presented by Ms Baey which indicates that the story is not fake.

Now, Ms Koh’s next point was on how people were demanding a harsher punishment.

Ms Koh asked, “The question then is, how much is enough? Do we use the Penal Code as an anchor and gauge from there? How do we quantify sexual offences in order for punishments to be enough? Why do people enjoy playing God, in deciding what is enough?”

These are fair questions. And really, that’s what the discussion is for and about. Shouldn’t these be matters that are discussed as a community so that we as a community can agree on measures that we feel are appropriate on the whole?

Ms Koh goes on to say that she is glad the issue has been brought to light and applauds the people who stood in support of the victim. However, she is also ‘disappointed’ over the way in which the community has responded by jumping on the ‘bandwagon who name and shame’.

The most incendiary statement Ms Koh made in her post, however, was when she encouraged the public to consider the person who committed the offence. She asked people to consider how he was coping and how the community can help him move on from this.

“As a community, we stand in solidarity with the victim of such offences, but we need to know that destroying the lives of an offender does not make the situation any better,” she wrote.

She concluded, “This is why I think that the internet is scary. We choose the people that we want to fight for…In a country where its people are the only resource, it is disheartening to see us so quick to tear each other down. How will we ever progress as a community if we can’t help each other to be better people?”

This inspired some heated comments in response directly on her post and on the facebook post of Mothership.sg. Some argued that there’s nothing wrong with posting the perpetrator’s photo on social media as means to warn others and as a consequence of his behaviour.

Others argued that Nicholas is on his own when it comes to dealing with the consequences of his actions and that the community is not obliged to do him any favours or make things easier for him. 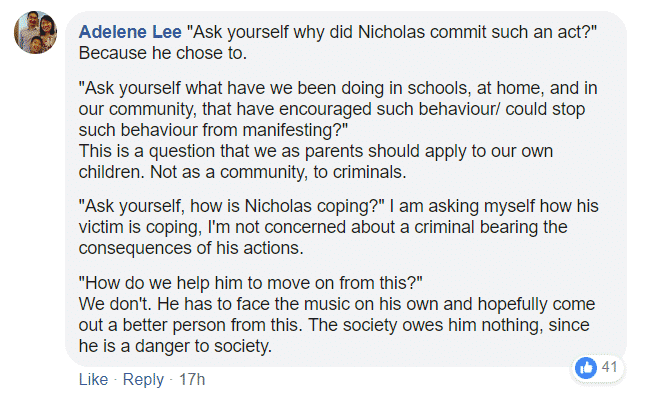 Others still asked if she would take the same stance if the same had happened to her or someone she loved: