The media has reported that the Accounting and Corporate Regulatory Authority (Acra) is currently keeping a close watch as investors are asking why Hyflux’s auditor KPMG failed to flag risks of Hyflux earlier.

For many years, Hyflux’s auditor KPMG had given Hyflux a clean bill of health, attesting to Hyflux’s ability to continue to operate. With the company now facing the possibility of liquidation after the Indonesian group decided against investing in Hyflux, the shareholders are asking why KPMG failed to flag the risk of Hyflux spiralling into heavy debt.

Acra which enforces Singapore’s strict auditing and accounting laws and standards, said in a statement that it will also “assess if further action is warranted”.

Hyflux slipped into the red for the first time in 2017 since its listing in 2001. The negative report was released in March last year. Suddenly 2 months later in May, Hyflux shocked investors when it filed for bankruptcy protection.

According to Singapore’s auditing standards, auditors are duty-bound to question if a company will remain solvent and be able to continue to operate. They are also required to assess any risks to the company’s ability to stay afloat and avoid bankruptcy.

NUS associate professor Mak Yuen Teen noted that there were no separate audited statements for the group’s loss-making subsidiary Tuaspring for 2017. Instead, Tuaspring’s 2016 audited figures were used by Hyflux in its latest replies to investors, with no mention on what happened to the 2017 statement. This was unusual, noted Prof Mak.

Hyflux had also relied on external valuers to arrive at its $1.4 billion valuation of Tuaspring in 2011, 2013 and 2016, but this was later written down by more than $900 million last year. Prof Mak said that while auditors do not involve in valuations, they should provide robust oversight and question the third parties too. “It is often the case here that auditors do not challenge assumptions enough,” he added.

Others pointed out that the $500 million perpetual securities – bonds with no maturity dates – issued by Hyflux were recorded as equity instead of debt, which is allowed under current accounting rules. This inevitably improved Hyflux’s debt-to-equity ratios and might have given the impression of recovery. One investor asked if KPMG had probed this aspect in determining Hyflux’s financial health, considering that the company had been generating negative cashflow for consecutive years.

KPMG, which had audited Hyflux since 2008, declined comment when approached by the media.

Incidentally, in its 2018 Financial Report, Temasek listed its auditor as KPMG: 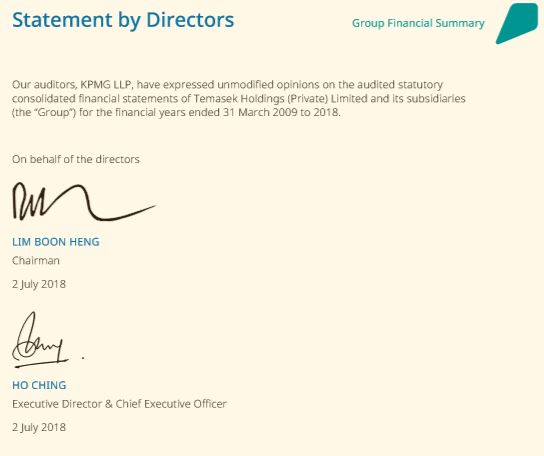 Last year, Temasek said it has attained a record net portfolio value of S$308 billion. It said that its one-year Total Shareholder Return (TSR) was reported to be 12.19%, with compounded annualised returns of 15% since inception in 1974.

KPMG concurred in its auditing of Temasek.