The Straits Times reported yesterday (3 Mar) an incident on 27 Dec involving a young and elderly man in Telok Kurau Park.

The elderly man, Mr Joseph Wee, 59, was walking his dog at the park when another dog, a black chow chow (“puffy-lion dog”), bit his dog. Mr Wee reacted instinctively by swinging the end of his dog’s leash at the black dog.

The black dog, which was not muzzled or leashed, then quickly ran away. Suddenly, a young man believed to be in his 30s as well as the owner of the black dog, allegedly came from behind Mr Wee and gave him a big blow. Mr Wee fell to the ground immediately.

When Mr Wee landed, he cut his left hand and right elbow. His knees were also bruised. As Mr Wee had undergone a double heart bypass last October, he has to take blood thinning medication. As a result, blood flowed easily and he was dripping blood everywhere, recalled Mr Wee. After Mr Wee finally got up, the young man confronted him. Mr Wee related to ST, “I asked him what he was doing. He was aggressive and dancing like Bruce Lee, ready for a fight.”

By then, about 10 residents who were also at the park rushed to the scene. One of them, Madam Tan, 69, scolded the young man. She said, “I think what he (the young man) did was terrible. If he can do that to an older man, he can do it to anybody.” When some residents wanted to call the police, they were supposedly told by the young man to “shut up” and mind their own business. Others said they saw the young man running towards Mr Wee before allegedly kicking him.

After Mr Wee went home, he went to see a doctor because he continued to experience a persistent pain in his back after the incident. X-ray revealed that Mr Wee had in fact, sustained fractures to his tailbone. He had to nurse his fractures at home for a month and was also unable to attend cardiac rehabilitation sessions.

Young man: I ran too fast

Last Wed (27 Feb), ST went to Telok Kurau Park with Mr Wee and spotted the same young man there. ST approached him and initially, he declined to talk to the reporter, saying that the police “had settled” the matter. Later, he confirmed his name to be Roland Neo. He denied kicking Mr Wee.

“I ran too fast,” said Mr Neo, adding that he intended only to “nudge” Mr Wee. There was “no ill intention”, he said.

At the time of the incident, with the group of residents witnessing it, Mr Neo did agree to pay for Mr Wee’s medical bills as he was bleeding. Both Mr Neo and Mr Wee exchanged mobile phone numbers so they could follow-up with the matter. However, since the incident, Mr Wee said Mr Neo was uncontactable. He told ST, “He gave me a number that was perpetually engaged… I don’t think he was really sorry.” Mr Wee has since lodged 2 police reports against Mr Neo.

The ST reporter also took the opportunity to ask Mr Neo at the park if he had contacted Mr Wee about paying for the medical bills. He admitted that they did exchange phone numbers but claimed that it was “impossible” to locate Mr Wee. “I asked my maids but they did not know where he lives,” he said.

At that point, the reporter deliberately pointed out Mr Wee, who was standing near-by, to Mr Neo. But he decided not to approach Mr Wee, saying, “I would love to apologise. But sometimes, apologising is too embarrassing.”

ST reported that, apparently, Mr Neo was out on bail for other offences at the time when he allegedly assaulted Mr Wee last Dec. The police confirmed that a report has been lodged and investigations are ongoing.

In the original ST report, ST said that the young man, Roland Neo, “turned out to be a grassroots volunteer holding the treasurer post in a community club’s management committee”.

However, ST subsequently deleted this sentence from its initial report, after it received a reply from the People’s Association (PA), the government agency in-charge of all grassroots activities in Singapore, saying that Mr Neo is no longer a grassroots treasurer. ST then appended the following message to its article:

Correction note: The People’s Association has clarified that Mr Neo is no longer the treasurer at a community club and that he left the post in 2017.

It’s not known if the departure of Mr Neo from his grassroots post has to do with his “other offences”, which he is currently “out on bail” for. PA did not say what those offences were, which occurred before the alleged assault on Mr Wee last Dec.

In any case, Mr Neo’s own LinkedIn information did state that he was the treasurer at “Northwest District/ Bukit Panjang CC/ Bukit Panjang PAP” starting from 2009.

On his Facebook page, he has a picture of him taken together with then President Tony Tan at the Istana.

His introductory message on his Facebook page said, “The world is a never-ending rat race of material stuffs; instead do things which improve others’ life.”

And he listed the following positions on his page: 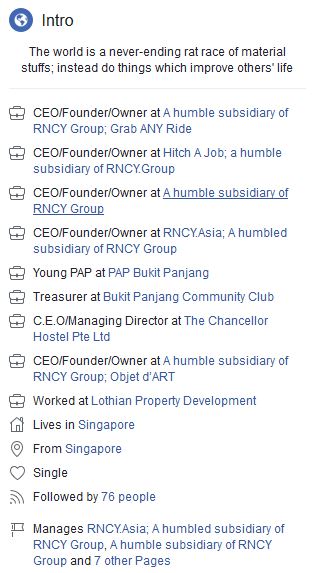 Now that PA has confirmed that he is no longer a grassroots leader at Bukit Panjang, it’s not known if he is still a Young PAP member with PAP at the Bukit Panjang branch.