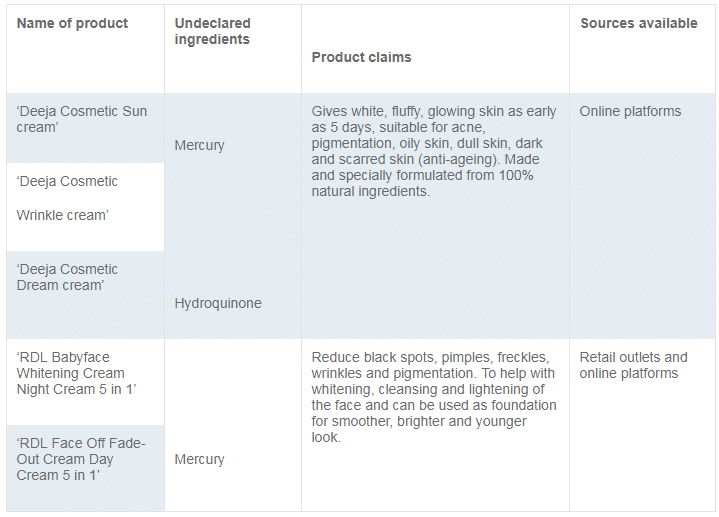 The HSA stated in a press statement on Thursday (31 January) that one of the products, ‘Deeja Cosmetic Wrinkle cream’, was found to contain very high levels of mercury, which exceeded the permissible limits by more than 40,000 times.

According to the authority, long-term exposure to such high amounts of mercury can cause serious health risks, including damage to the kidneys, digestive and nervous systems.

Another product, ‘Deeja Cosmetic Dream cream’ was found to contain hydroquinone, a potent ingredient prohibited in over the counter skincare cosmetic products. Hydroquinone is a prescription only medicine and should only be used under medical supervision.

RDL Babyface Whitening Cream Night Cream 5 in 1 and RDL Face Off Fade-Out Cream Day Cream 5 in 1 were imported by Arklife Distributors Pte Ltd and were sold in retail outlets.

HSA noted that it has directed Arklife Distributors Pte Ltd to stop the sale of the RDL creams and to recall the affected products from retail outlets.

The RDL creams were also found to be sold on online platforms by various other sellers. Administrators of online platforms have been directed to remove web listings of all the affected products.

The authority stated that mercury is a toxic heavy metal and is prohibited for use as an ingredient in cosmetic products. Regular application of creams containing mercury could lead to rash, skin discolouration and blotching while long-term exposure to high levels of mercury in cosmetic products can cause serious health consequences, including damage to the kidneys, digestive and nervous systems.

While, hydroquinone is a potent ingredient that is used in prescription medicines for the treatment of skin conditions. It is prohibited in over-the-counter skincare cosmetic products and should only be used under medical supervision.

The inappropriate use of hydroquinone especially in high concentrations could result in unwanted effects such as changes in skin colour and hypersensitivity reactions such as rashes, skin redness, tingling and burning of skin.