An Infringement Decision (“ID”) against the owners or operators of Capri by Fraser Changi City Singapore, Crowne Plaza Changi Airport Hotel, Village Hotel Changi, and Village Hotel Katong, was issued for infringing section 34 of the Competition Act (Cap. 50B) by exchanging commercially sensitive information in connection with the provision of hotel room accommodation in Singapore to corporate customers. The hotels were fined $1.5 million in total for the offence.

The Competition and Consumer Commission of Singapore (CCCS) said that the investigation revealed that the sales representatives of Capri and Village Hotels exchanged commercially sensitive information relating to their corporate customers from at least 3 July 2014 to 30 June 2015.

The sales representatives of Capri and Crowne Plaza also exchanged commercially sensitive information relating to their corporate customers from at least 14 January 2014 to 30 June 2015.

According to the watchdog, the sales representatives exchanged information which is likely to have influenced the hotels’ subsequent conduct in the market or placed them in a position of advantage over their corporate customers in contract negotiations, which included critical factors that were taken into consideration in the determination of subsequent prices that were offered by the hotels to their corporate customers.

The watchdog cited an example when the sales representatives disclosed to each other the corporate room rates that had been negotiated on a confidential basis and agreed upon with specific customers.

It added that they also discussed future price-related strategies such as their proposed price increases for the
following contractual year, their proposed bid prices in response to customer requests, and whether or not they intended to agree to a particular customer’s price reduction request in the course of corporate rate negotiations.

Without the exchange of commercially sensitive information, each sales representative would have had to independently determine their conduct on the market; and there would have been more competitive pressure on rates (and/or terms) offered to corporate customers.

CCCS said that it takes the view that the Capri-Village Conduct and the Capri-Crowne Plaza Conduct were, by their very nature, anticompetitive, and caused serious harm to competition.

On 2 August 2018, CCCS sent each Party, including those that applied for lenient treatment under CCCS’s Leniency Programme, a notice of its Proposed Infringement Decision (“PID”). CCCS received representations on the PID from the Parties between 17 September 2018 and 9 October 2018. 2 CCCS has carefully considered all the representations in reaching its findings.

In levying financial penalties, CCCS said that it took into account the relevant turnovers of the Parties, the nature, duration and seriousness of the infringement, aggravating and mitigating factors (such as whether a party had co-operated with CCCS), as well as representations made by the Parties. 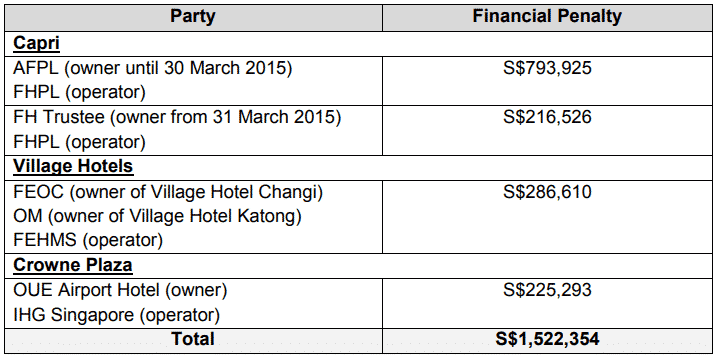 Mr. Toh Han Li, Chief Executive, CCCS said,  “The exchange of non-public commercially sensitive information between competitors is harmful to competition and customers in the market as it reduces the competitive pressures faced by competitors in determining their commercial decisions, including the price they will offer to customers. This can result in customers having less competitive prices and options after such exchanges. If a business receives such information from its competitor, it should immediately and clearly distance itself from such conduct and report it to CCCS.”

The case of Roslan bin Bakar