EMA should explain why oil price drops more than 35% but electricity tariffs drop only 1.2 per cent

It was reported that from January to March 2019, consumers can expect lower electricity and gas tariffs due to lower cost of natural gas for electricity generation and a drop in fuel prices from the quarter before.

Energy utilities provider SP Group announced yesterday (30 Dec) that the electricity tariffs will drop by an average of 1.2 per cent, or 0.28 cent, per kilowatt hour (kWh), from 1 Jan to 31 March next year, compared to the current 4th quarter (Oct – Dec 2018).

The provider which is wholly owned by Temasek, said that households’ electricity tariff will decrease from 24.13 cents to 23.85 cents per kWh for the coming quarter. This means that the average monthly electricity bill for four-room Housing Board flats will fall by $1 a month, excluding GST, it added.

This marks the first drop in electricity tariff after rising for five consecutive quarters since October 2017.

During the National Day Rally in Aug this year, Prime Minister Lee Hsien Loong said that Singapore “cannot control electricity tariffs because we import almost all our energy”. And because electricity is generated from natural gas, the cost fluctuates according to global oil prices, he said.

And according to Energy Market Authority (EMA), the average natural gas price (indexed to oil prices) of the preceding quarter is used to set the electricity tariff for the next quarter.

So, looking at the oil prices in the last number of quarters, indeed, oil prices had been increasing from Jul last year to Oct this year: 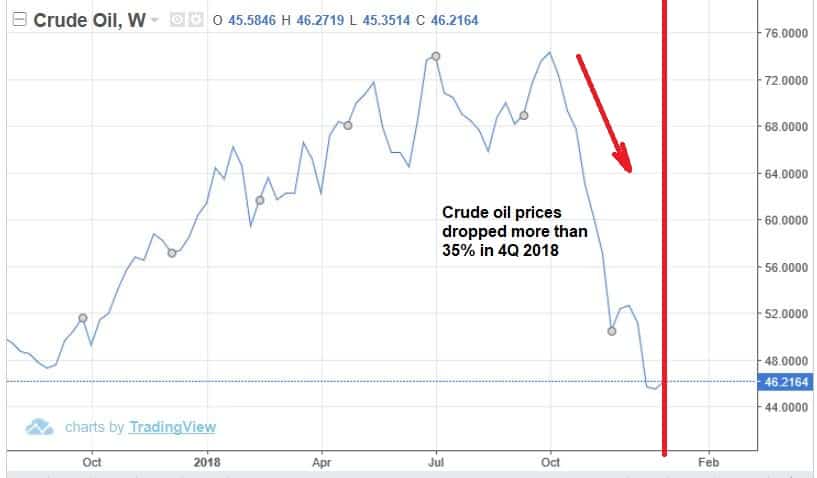 However, from Oct this year to today (31 Dec), there had been a drop of more than 35% in oil prices. And yet, the government only allowed the electricity tariffs to drop by an average of 1.2% for the coming quarter.

Delving into the matter further, it is noted that, according to EMA, Singapore’s electricity tariffs are calculated based on 2 components – fuel cost and non-fuel cost.

The fuel cost, or cost of imported natural gas, is tied to oil prices by commercial contracts, which change depending on global market conditions, EMA said. The non-fuel cost is the other costs, including delivering electricity to homes and other “market support”, “operation” and “market admin” fees.

Given that fuel cost dropped more than 35% but the total average tariff only dropped 1.2%, this can only mean that Singapore is highly inefficient in delivering electricity to our homes. Also, our “market support”, “operation” and “market admin” fees must be very high.

It would be good if EMA can breakdown the electricity costs further for all Singaporeans to see for the sake of transparency. What do you think?