Singapore money in bag (Photo by Studio888 from Shutterstock.com)

In a joint press release on Thursday, the Ministry of Manpower (MOM) and the Ministry of Law (MinLaw) announced that the aggregate loan caps and the self-exclusion framework for borrowing from licensed moneylenders for Singapore Citizens (SCs) and Permanent Residents (PRs) will be extended to all foreigners residing in Singapore so as to better protect all affected parties from the effects of over-borrowing.

Currently, the Moneylenders Rules limit the amount of unsecured credit any single licensed moneylender may lend to any SCs or PRs.

In January 2018, MinLaw announced amendments to the Moneylenders Act to introduce aggregate loan caps to better protect borrowers while allowing for reasonable and safe access to licensed moneylending credit. The caps, which will be implemented in the fourth quarter 2018 are that the individuals earning up to $20,000 a year may borrow up to $3,000 from all moneylenders combined and all other individuals may borrow up to six times of monthly income from all moneylenders combined.

Since January 2018, MinLaw has been working with the Moneylenders Credit Bureau (MLCB), the industry, and Voluntary Welfare Organisations (VWOs) to prepare for the changes. This includes developing a self-exclusion framework to help individuals regulate their own borrowing and take part in debt assistance schemes. 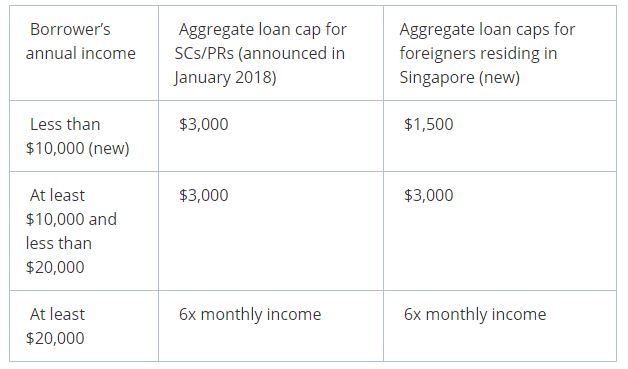 Appeals by employers to retain their foreign worker will be considered on a case-by-case basis, it added.

MOM states that work pass holders who face financial difficulties can approach existing support channels such as VWOs, the Migrant Worker’s Centre or the Centre for Domestic Employees, for advice and assistance.

MinLaw and MOM noted that it will implement the other changes (the self-exclusion framework for foreigners residing in Singapore, and debarment from new employment for work pass holders who borrow from unlicensed moneylenders) in 2019.